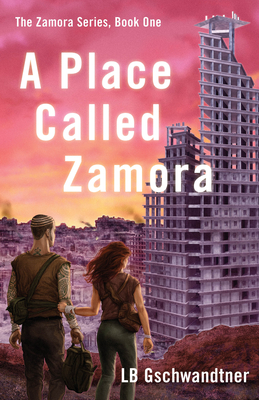 Niko and El are trapped in a politically corrupt dystopian city where brutality rules. After winning a cynical race where only one rider can survive, Niko tosses aside his chance to join the city's corrupt inner circle by choosing lovely, innocent El as his prize--thus upsetting the ruling order and placing them both in mortal danger. With the Regime hunting them and the children of the city fomenting a guerrilla revolt, the two attempt a daring escape to the possibly mythical utopia, Zamora. But as events unfold, the stirrings of love El once felt for Niko begin to morph into mistrust and fear. If they reach Zamora, will Niko ever claim his secret birthright? And what will the future hold if he loses El's love?

Praise For A Place Called Zamora…

“A dystopian novel that readers of any age will eagerly devour, A Place Called Zamora explores an age-old question: Can love survive when the world is falling apart? Gschwandtner creates a compelling and highly detailed world that includes a wide array of fascinating characters. This is a lot of world building and the author does a fantastic job with great level of detail that sucks you right in. A Place Called Zamora is an engaging kick-off to what promises to be a dynamic series!”
―Kim Wright, winner of the Willie Morris Award for Southern Fiction and author of Love in Mid Air, The Unexpected Waltz, The Canterbury Sisters, and Last Ride to Graceland

“LB Gschwandtner’s A Place Called Zamora is an enthralling dystopian novel peopled with heart-tugging characters and a can’t-put-down plot. It’s a tale of touching inner goodness pitted against a heartless society. About capture and escape. And in the end, about love.”
―Jennie Fields, author of The Age of Desire and the upcoming Atomic Love

“With her sharp storytelling skills, Ms. Gschwandtner takes the reader on a blood-curdling ride through a post-apocalyptic world where no one is safe. And yet, for all of its astonishing twists, turns, and futuristic touches, the novel speaks directly to what we face today with our truth-failing government, and the need for an unlikely hero to arise.”
―Lary Bloom, author of Sol LeWitt: A Life of Ideas; columnist featured in the New York Times; and teacher at Yale, Fairfield University, Trinity College, and Wesleyan University

LB Gschwandtner has attended numerous fiction-writing workshops―the Iowa Writers Workshop and others―studied with Fred Leebron, Bob Bausch, Richard Bausch, Lary Bloom, Joyce Maynard, Sue Levine, and Wally Lamb, and published five adult novels, one middle-grade novel, and one collection of quirky short stories. She began her professional career as an artist, became a magazine editor in 1980, and began writing fiction in 1986. She’s won awards in literary contests and independent publishing contests, and been published in literary digests and magazines. A Place Called Zamora is her eighth book.
or support indie stores by buying on