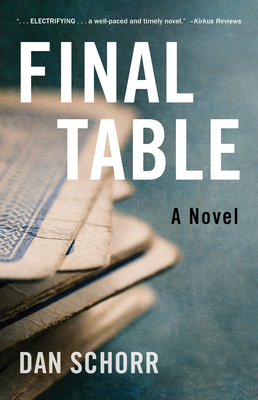 A political thriller about sexual misconduct in the #MeToo era, one victim's battle to survive and overcome trauma, and the cable news machine that feeds off titillating scandal coverage and inflammatory confrontation, Final Table draws upon Dan Schorr's firsthand experience as a New York City sex crimes prosecutor and sexual misconduct investigator to tackle the worlds of political and media dysfunction.
Former White House staffer Maggie Raster is struggling to build her own consulting firm and overcome a recent sexual assault by an ex-boss. Kyler Dawson, a broke former poker champion, desperately needs to gain entry into a controversial but potentially very lucrative international poker tournament. The host nation faces widespread condemnation for the recent murder of a prominent female US journalist, and a pending presidential executive order threatens to prohibit him and others from participating.
Maggie's chaotic first attempt to promote her new business as a television political analyst brings her to Kyler's attention, and convinces him that her political smarts and connections can provide the help he needs. When he approaches her for assistance, she must decide whether to agree--in return for a portion of the potential $20 million prize. To succeed, she will have to confront numerous challenges--personal and political, foreign and domestic--including mounting pressure to publicly address the misconduct of her former boss. Kyler also has his own obstacles and upsetting past to overcome, but if they each can outmaneuver their daunting challenges, he might win the tournament--and earn them both a fortune.