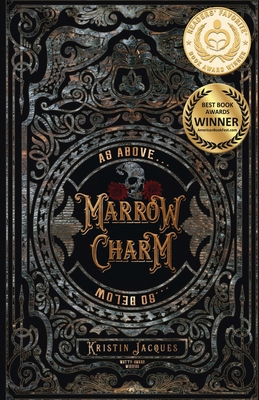 Watty Award-Winning Novel MARROW CHARM by Kristin Jacques will thrill fans of Brandon Sanderson's MISTBORN and Leigh Bardugo's SHADOW AND BONE. Azure Brimvine lives in a world decimated by magic-one where humans have retreated underground from the overwhelming dangers of the surface. But Below is no safer than Above. Magic-born plagues continue to eat away at the remaining human cities. It is a sickness that doesn't merely kill but creates aberrations for those who are stricken: people twisted by magic into something dark, dangerous, and powerful. But when Azzy's brother, Armin, is infected and cast out into the Above, she sets out after him, determined to be there no matter what he becomes. The world Above is full of monsters, both wild and cunning, and some more human than Azzy was led to believe. Her search for Armin leads her to Avergard, a ruthless city of inhuman lords and twisted creatures. Azzy must find allies and forge new bonds in this broken world, brave the perils of the Above, and reach Armin before his new power is used to open the Gate once more. The Gate Cycle Series in order:
1. Marrow Charm
2. Skin Curse
3. Blood Vow.