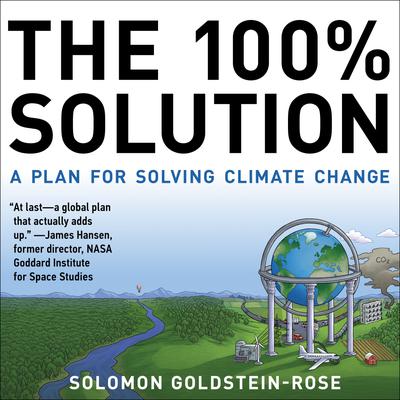 A Plan for Solving Climate Change

The world must reach negative greenhouse gas emissions by 2050 to avoid the most catastrophic effects of climate change. Yet no single plan has addressed the full scope of the problem—until now.

In The 100% Solution, Solomon Goldstein-Rose—a leading millennial climate activist and a former Massachusetts state representative—makes clear what needs to happen to hit the 2050 target: the manufacturing booms we must spur, the moonshot projects we must fund, the amount of CO2 we'll have to sequester from the atmosphere, and much more.

Most importantly, he shows us the more prosperous and equitable world we can build by uniting the efforts of activists, industries, governments, scientists, and voters to get the job done.

This is the guide we've been waiting for. As calls for a World War II–scale mobilization intensify—especially among youth activists—this action-oriented book arms us with specific demands, sets the stakes for what our leaders must achieve, and proves that with this level of comprehensive thinking we can still take back our future.

Ever since Adam Lofbomm pressed "Record" on his Fisher-Price recorder back in 1984, he's been bringing worlds to life in words. Over the years, his passion for language inspired him to read broadly, write extensively, speak publicly, perform on-stage and on-camera, but when he stepped into the vocal booth for his first narration job in Seoul, Korea, back in 2006, all those many pieces just clicked into place. He realized then and there that voice acting was what he was made to do.
Over the last eleven years working as a professional voice-over actor, Adam has had the great fortune to collaborate with some of the best publishers and organizations in the world. Whether or not Malcolm Gladwell was right when he said that ten-thousand hours will make you world-class at something, Adam did stop counting after he surpassed that milestone in 2016.