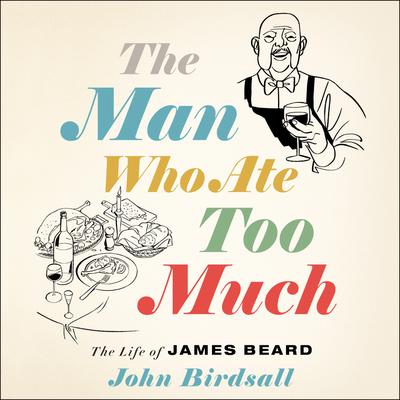 The Man Who Ate Too Much (Digital Audiobook)

The Life of James Beard

In the first portrait of James Beard in twenty-five years, John Birdsall accomplishes what no prior telling of Beard's life and work has done: He looks beyond the public image of the "Dean of American Cookery" to give voice to the gourmet's complex, queer life and, in the process, illuminates the history of American food in the twentieth century. At a time when stuffy French restaurants and soulless Continental cuisine prevailed, Beard invented something strange and new: the notion of an American cuisine.

Informed by previously overlooked correspondence, years of archival research, and a close reading of everything Beard wrote, this majestic biography traces the emergence of personality in American food while reckoning with the outwardly gregarious Beard's own need for love and connection, arguing that Beard turned an unapologetic pursuit of pleasure into a new model for food authors and experts.

In stirring, novelistic detail, The Man Who Ate Too Much brings to life a towering figure, a man who still represents the best in eating and yet has never been fully understood—until now. This is biography of the highest order, a book about the rise of America's food written by the celebrated writer who fills in Beard's life with the color and meaning earlier generations were afraid to examine.

Daniel Henning is a director, producer, actor, and writer. His work has been seen on HBO, CBS, NBC, ABC, FOX, MTV, Comedy Central, and on stages throughout Southern California. He won a 2017 Telly Award for "Best Writer" for the film version of his play The Tragedy of JFK (as Told by Wm. Shakespeare). As director and writer, his TV and film work includes MTV's Rob Dyrdek's Fantasy Factory and the film Critic's Choice. He won the NAACP Theatre Award for "Best Director of a Musical" for The Wild Party.

He is the Founding Artistic Director of Hollywood's The Blank Theatre, winning over 200 awards for his productions, including "Best Production," from LA Drama Critic Circle, LA Weekly, Ovations, NAACP, etc. Henning has been inspirational to thousands of young artists through his creation of The Blank's Young Playwrights Festival (the only professional nationwide competition for playwrights aged nine to nineteen). He directed the first play by 2016 Tony Award Winner for "Best Play" Stephen Karam when Stephen was seventeen and a winner in The Blank's Young Playwrights Festival.

Henning has also been an acting teacher and coach and is known for his ability to spot young talent. He has given opportunities to many young actors who later went on to success in Hollywood including Tessa Thompson, Noah Wyle, Alison Brie, Molly Shannon, Academy Award winner Octavia Spencer, and Sarah Michelle Gellar. He coached Sarah Michelle Gellar on her auditions for the landmark TV series Buffy the Vampire Slayer, and they shared a close personal friendship, even traveling to Australia together with family for New Year's Eve 2000, where the paparazzi photographed Henning and Gellar dancing. For several months, Henning was rumored to be dating Gellar in the Australian fan magazines (including Big Hit Magazine), which, of course, was inaccurate as Henning was traveling with his husband, Rick Baumgartner.
He is a graduate of NYU's Tisch School of the Arts, Circle in the Square Theatre School, and American Conservatory Theatre. His work for LGBTQ Equality includes creating the fiftieth Anniversary Celebration of the Black Cat Protests (the first major LGBTQ Demonstration in the US) and directing and hosting the 2017 LA City Council LGBTQ Pride Ceremony. He was recently honored by the CA State Legislature for his work in LGBTQ Equality and nurturing the future of the Arts.

He has also narrated dozens of audiobooks, both nonfiction and fiction.