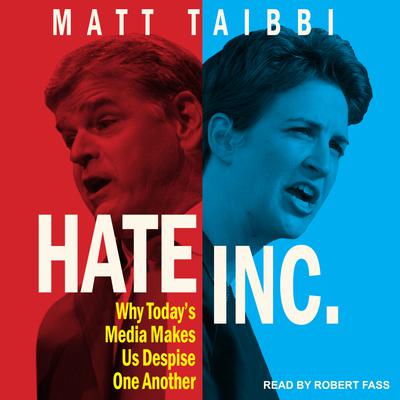 Part tirade, part confessional from the celebrated Rolling Stone journalist, Hate Inc. reveals that what most people think of as "the news" is, in fact, a twisted wing of the entertainment business.

In this characteristically turbocharged new book, celebrated Rolling Stone journalist Matt Taibbi provides an insider's guide to the variety of ways today's mainstream media tells us lies. Part tirade, part confessional, it reveals that what most people think of as "the news" is, in fact, a twisted wing of the entertainment business.

In the Internet age, the press have mastered the art of monetizing anger, paranoia, and distrust. Taibbi, who has spent much of his career covering elections in which this kind of manipulative activity is most egregious, provides a rich taxonomic survey of American political journalism's dirty tricks.

Heading into a 2020 election season that promises to be a Great Giza Pyramid Complex of invective and digital ugliness, Hate Inc. will be an invaluable antidote to the hidden poisons dished up by those we rely on to tell us what is happening in the world.