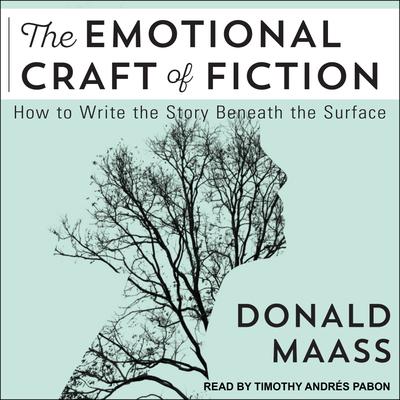 How to Write the Story Beneath the Surface

Engage Your Readers with Emotion

While writers might disagree over showing versus telling or plotting versus pantsing, none would argue this: If you want to write strong fiction, you must make your readers feel. The reader's experience must be an emotional journey of its own, one as involving as your characters' struggles, discoveries, and triumphs are for you.

That's where The Emotional Craft of Fiction comes in. Veteran literary agent and expert fiction instructor Donald Maass shows you how to use story to provoke a visceral and emotional experience in readers. Topics covered include:

● Beyond showing versus telling

● Connecting the inner and outer journeys and much more

Readers can simply read a novel . . . or they can experience it. The Emotional Craft of Fiction shows you how to make that happen.

Timothy Andres Pabon is an actor and Spanish and English voice-over artist/audiobook narrator from Washington DC. He has over 140 books on Audible.com, one of which was nominated for a 2015 Society of Voice Arts and Sciences Award and another which was awarded an AudioFile Earphones award as part of an ensemble audiobook cast in 2014. His voice-over clients include Gabrielle Giffords, Hillary Clinton, The Sierra Club, NBC, and the 10-episode series Chasing Che on National Geographic. He has been seen on House of Cards seasons 3 and 4 as Mark, a White house press correspondent. He has also been a costar on HBO's acclaimed series The Wire opposite country music legend Steve Earl. As a stage actor he has worked Off-Broadway at the June Havoc Theatre, and his regional credits include Center Stage, the Shakespeare Theatre, Arena Stage, The Hippodrome, Olney Theatre, Rep Stage, and GALA Hispanic Theatre. Tim is a proud father of two children, and a member of AFTRA/SAG and Actor's Equity.