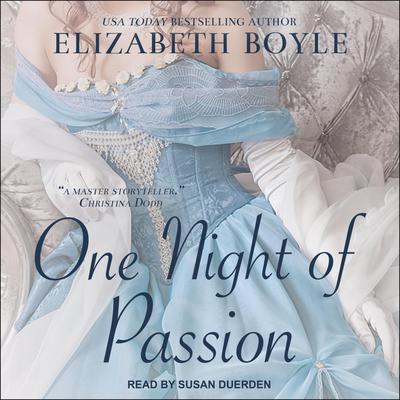 One Night of Passion (The Danvers) (Digital Audiobook)

Georgiana Escott has one night to find the perfect man to ruin her and leave her with a tattered reputation so she can avoid an arranged marriage to an aging, despicable roué. With a misstep, she tumbles into the arms of the disgraced and dashing Lord Danvers. But Georgie doesn't know that the lover she has enticed to follow her into the night and the stranger she holds responsible for her misfortunes are in the same . . .

When Lord Danvers find himself entangled with a tempting Cyprian, his secret mission to expose a dangerous spy goes awry. Yet once he starts to unmasked this bewitching lady, he realizes the seductress who claims his heart may be the traitor he seeks. Mistrust makes them adversaries in a perilous game—but how can he dismiss his obsession with her when one night of passion entwines their lives forever?