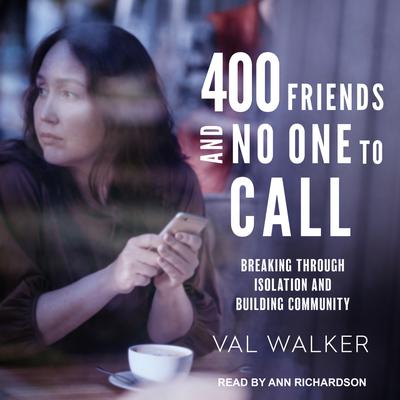 400 Friends and No One to Call (Digital Audiobook)

Breaking through Isolation and Building Community

We can be well connected, with 400 friends on Facebook and still have no one to count on. Ironically, despite social media, social isolation is a growing epidemic in the United States. The National Science Foundation reported in 2014 that the number of Americans with no close friends has tripled since 1985. One out of four Americans has no one with whom they can talk about their personal troubles.

Social isolation can shatter our confidence. In isolating times, we're not only lonely, but we're ashamed of our loneliness because our society stigmatizes people who are alone without support. As a single, fifty-eight-year-old woman who finds herself stranded after major surgery, Val Walker has woven into the narrative her own story. A well-established rehabilitation counselor, she was too embarrassed to reveal on social media how utterly isolated she was by asking for someone to help, and it felt agonizingly awkward calling colleagues out of the blue. As she recovered, Val found her voice and developed a plan of action for people who lack social support, not only to heal from the pain of isolation, but to create a solid strategy for rebuilding support. 400 Friends and No One to Call spells out the how-tos for befriending our wider community, building a social safety net, and fostering our sense of belonging.

Ann Richardson is an award-winning narrator. With a background of drama and music prevalent in her Midwestern upbringing, she delights in narrating fiction and portraying characters with a variety of accents, including Scandinavian and Southern U.S. Being of Swedish heritage is an important facet of Ann's life, as her father was a Swedish immigrant, and she travels to Sweden every few years to spend time with family and brush up on speaking the language. In her spare time Ann is a volunteer narrator for Learning Ally (formerly Recording for the Blind & Dyslexic), and also enjoys sculpting, painting, long-distance running, and hanging out with her family in Northern California.