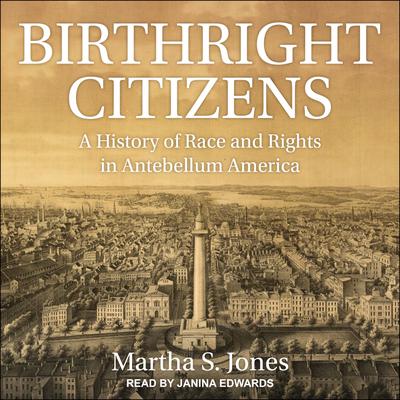 A History of Race and Rights in Antebellum America

Birthright Citizens tells how African American activists radically transformed the terms of citizenship for all Americans.

Before the Civil War, colonization schemes and black laws threatened to deport former slaves born in the United States. Birthright Citizens recovers the story of how African American activists remade national belonging through battles in legislatures, conventions, and courthouses. They faced formidable opposition, most notoriously from the US Supreme Court decision in Dred Scott. Still, Martha S. Jones explains, no single case defined their status. Former slaves studied law, secured allies, and conducted themselves like citizens, establishing their status through local, everyday claims. All along they argued that birth guaranteed their rights.

With fresh archival sources and an ambitious reframing of constitutional law-making before the Civil War, Jones shows how when the Fourteenth Amendment constitutionalized the birthright principle, the aspirations of black Americans' aspirations were realized.

Janina Edwards, a graduate of New York University's Tisch Schools of the Arts, recorded her first audiobook in 1987. She was born in Chicago, soaked in New York City's African and West Indian accents for 11 years, and for the past twenty years has swum in the swagger of the south (Atlanta, Georgia). As a result, she excels in portraying authentic characters and voices the African Diaspora. Her 2018 audiobook, The Wedding Date, is an AudioFile Earphones Award winner, and Voice of Freedom (2016, Dreamscape) was an Audie Award finalist. In addition to narrating audiobooks, she is a certified yoga teacher, sings kirtan, and plays the violin.