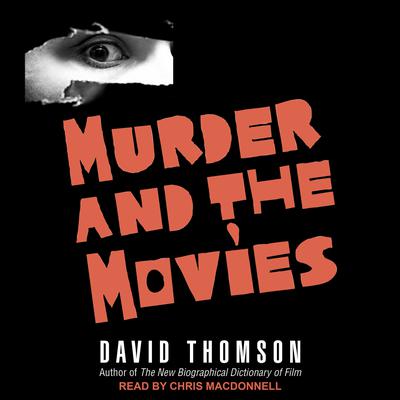 Murder and the Movies (Digital Audiobook)

How many acts of murder have each of us followed on a screen? What does that say about us? Do we remain law-abiding citizens who wouldn’t hurt a fly?

Film historian David Thomson, known for wit and subversiveness, leads us into this very delicate subject. While unpacking classics such as Seven, Kind Hearts and Coronets, Strangers on a Train, The Conformist, The Godfather, and The Shining, he offers a disconcerting sense of how the form of movies makes us accomplices in this sinister narrative process.

By turns seductive and astringent, very serious and suddenly hilarious, Murder and the Movies admits us into what Thomson calls "a warped triangle": the creator working out a compelling death; the killer doing his and her best; and the entranced spectator trying to cling to life and a proper sense of decency.

Chris MacDonnell is a classically trained actor who graduated from the London Academy of Music and Dramatic Arts (LAMDA) in 1973. He has an excellent reputation in the U.K. for playing leading and supporting roles in theater, television, radio drama, and films. His theater credits include London's West End and the Royal National Theatre. He's also featured in British TV shows, BBC radio-drama, commercials, and films.

In the U.S. he's voiced many commercials, promos, games, and animations. He's also a featured character in the historical drama set against the backdrop of the American War of Independence, Courage, New Hampshire for PBS, in which he plays Merry Pugwell.

He came to narration in 2013, and since then he's recorded over twenty titles in a variety of genres, including epic fantasy, thrillers, historical romance, and biography.

Chris now lives and works in Southern California, where his forty-year career continues to flourish.