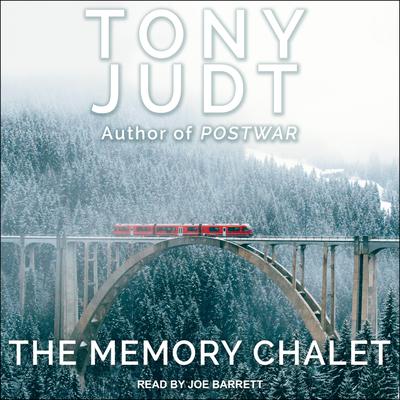 The Memory Chalet is a memoir unlike any you have ever read before. Each essay charts some experience or remembrance of the past through the sieve of Tony Judt's prodigious mind. His youthful love of a particular London bus route evolves into a reflection on public civility and interwar urban planning. Memories of the 1968 student riots of Paris meander through the divergent sex politics of Europe, before concluding that his generation "was a revolutionary generation, but missed the revolution." A series of road trips across America lead not just to an appreciation of American history, but to an eventual acquisition of citizenship. Foods and trains and long-lost smells all compete for Judt's attention; but for us, he has forged his reflections into an elegant arc of analysis. All as simply and beautifully arranged as a Swiss chalet-a reassuring refuge deep in the mountains of memory.

Joe Barrett began his acting career at the age of five in the basement of his family's home in upstate New York. He has gone on to play many stage roles, both on and off-Broadway, and in regional theaters from Los Angeles, Houston, and St. Louis to Washington DC, San Francisco, and Portland, Maine. He has appeared in films and television, both prime time and late night, and in hundreds of television and radio commercials. Joe has narrated over two hundred audiobooks. He has been an Audie Award finalist eight times, and his narration of Gun Church by Reed Farrel Coleman won the 2013 Audie Award for Original Work. AudioFile magazine has granted Joe fourteen Earphones Awards, including for James Salter's All That Is and Donald Katz's Home Fires. Regarding Joe's narration of John Irving's A Prayer For Owen Meany, AudioFile said, "This moving book comes across like a concerto . . . with a soloist-Owen's voice-rising from the background of an orchestral narration." Joe is married to actor Andrea Wright, and together they have four very grown children.