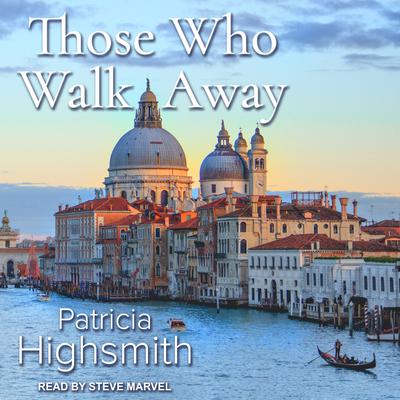 Those Who Walk Away (Digital Audiobook)

Ray Garrett, a wealthy young American living in Europe, is grieving over the death of his wife. Ray is at a loss for why she would take her own life, but Peggy's father Ed Coleman, has no such uncertainty—he blames Ray completely.

Late one night in Rome, Coleman shoots Ray at point-blank range. He thinks he's had his revenge, but Ray survives, and follows Coleman and his wealthy girlfriend to Venice.

In Venice, it happens again: Coleman attacks his loathed son-in-law, dumping him into the cold waters of the laguna. Ray survives with the help of a boatman—and this time he goes into hiding, living in a privately rented room under a fake name. So begins an eerie game of cat and mouse. Coleman wants vengeance, Ray wants a clear conscience, and the police want to solve the mystery of what happened to the missing American.

As Ray and Coleman stalk each other through the narrow streets and canals, the hotels and bars of the beguiling city, Those Who Walk Away becomes a literary thriller that simmers with violence and unease from the acclaimed author of such classics as Strangers on a Train and The Talented Mr. Ripley.

Multiple Voice Arts Award nominee Steve Marvel is one of only four narrators to be chosen a winner of the ACX Audiobook Narration Contest by Audible's Mike Charzuk. Steve received his classical theater training at Northwestern University and continues to work in theater, film, and television. The former voice of financial writer John Mauldin's Thoughts from the Frontline weekly newsletter, Steve's voice-over work also includes video games for the likes of Mattel, Sony, and Activision, and regular stints in eLearning. Steve applies his performance skills and mastery of accents to craft unique, distinctive characters for his fiction titles.