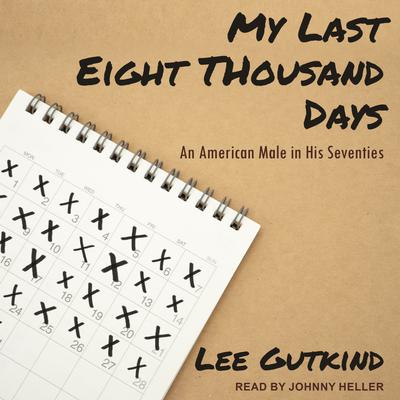 An American Male in His Seventies

As founding editor of Creative Nonfiction and architect of the genre, Lee Gutkind played a crucial role in establishing literary, narrative nonfiction in the marketplace and in the academy. A longstanding advocate of New Journalism, he has reported on a wide range of issues—robots and artificial intelligence, mental illness, organ transplants, veterinarians and animals, baseball, motorcycle enthusiasts—and explored them all with his unique voice and approach.

In My Last Eight Thousand Days, Gutkind turns his notepad and tape recorder inward, using his skills as an immersion journalist to perform a deep dive on himself. Here, he offers a memoir of his life as a journalist, editor, husband, father, and Pittsburgh native, not only recounting his many triumphs, but also exposing his missteps and challenges. The overarching concern that frames these brave, often confessional stories, is his obsession and fascination with aging: how aging provoked anxieties and unearthed long-rooted tensions, and how he came to accept, even enjoy, his mental and physical decline. Gutkind documents the realities of aging with the characteristically blunt, melancholic wit and authenticity that drive the quiet force of all his work.

Working in every genre, Johnny Heller has narrated over seven hundred audiobooks. He is a 2005 and 2009 Audie Award winner, a double nominee in 2015, a 2014 nominee for Best Male Narrator, a double nominee in 2012 and was named a Best Voice of 2008-2011, 2014, 2015 and a Publishers Weekly Listen Up Award Winner 2008-2013. A winner of over twenty-five AudioFile Earphones Awards, AudioFile magazine named Heller one of the top fifty voices of the twentieth century. Johnny coaches actors in audiobook narration and commercial voice-over locally, nationally and internationally.