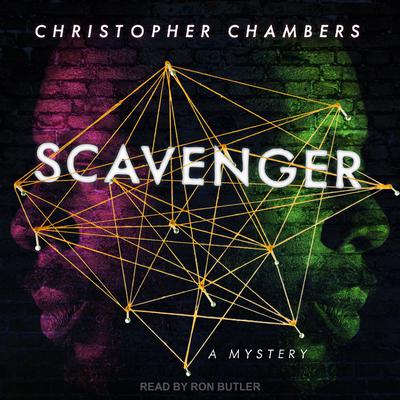 Christopher Chambers brings a twenty-first-century take on hardboiled noir tales in Scavenger, a gripping thriller underscored by themes of race, homelessness, hustling, and the savagery—and salvation—of the human psyche.

The novel centers on Dickie Cornish, a Black streetwise survivor living in a homeless camp near DC's Smithsonian Museum of Natural History. Framed for the murder of two of his closest friends and facing life in prison, Dickie crosses paths with wealthy ex-Homeland Security Secretary, Jamie Bracht. Bracht offers him a chance at a new life if Dickie can navigate an underground world to uncover a prize Bracht will stop at nothing to acquire.

As Dickie searches, Scavenger tracks its way through an underground population of Washington, DC, where hustlers, drug addicts, homeless, and undocumented immigrants jostle for crumbs while trying to survive. Chambers paints a portrait of DC from the ground up, with back-alley streetscapes, gentrification clashes, and unexpected encounters between politicians and bottom-rung natives—all set against a soundscape of patois, street Spanish, and DC slang. A hopeless amateur detective at first, Dickie quickly learns the ropes of being a sleuth in a cat-and-mouse game of greed, deceit, double-crossing, and murder.

JD Jackson is a theater professor, aspiring stage director, and award-winning audiobook narrator. A classically trained actor, his television and film credits include roles on House, ER, Law & Order, Hack, Sherrybaby, Diary of a City Priest, and Lucky Number Slevin. The recipient of several audiobook awards for narration and an Odyssey Honor for G. Neri's Ghetto Cowboy, JD has also been named one of AudioFile magazine's Best Voices of the Year for 2012 and 2013.