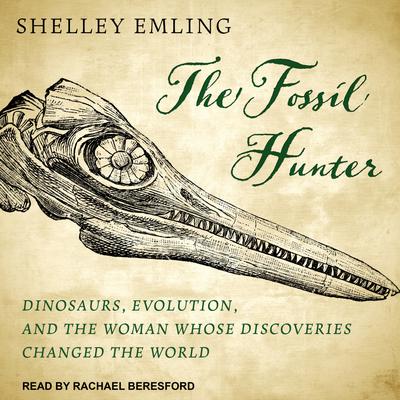 Dinosaurs, Evolution, and the Woman Whose Discoveries Changed the World

Mary Anning was only twelve years old when, in 1811, she discovered the first dinosaur skeleton—of an ichthyosaur—while fossil hunting on the cliffs of Lyme Regis, England. Until Mary's incredible discovery, it was widely believed that animals did not become extinct. The child of a poor family, Mary became a fossil hunter, inspiring the tongue-twister, "She Sells Sea Shells by the Seashore." She attracted the attention of fossil collectors and eventually the scientific world. Once news of the fossils reached the halls of academia, it became impossible to ignore the truth. Mary's peculiar finds helped lay the groundwork for Charles Darwin's theory of evolution, laid out in his On the Origin of Species. Darwin drew on Mary's fossilized creatures as irrefutable evidence that life in the past was nothing like life in the present.

A story worthy of Dickens, The Fossil Hunter chronicles the life of this young girl, who became a world-renowned paleontologist. Dickens himself said of Mary: "The carpenter's daughter has won a name for herself, and deserved to win it."

Rachael Beresford is a British classically trained actress and voice talent. With a precise, engaging, and entertaining voice, Rachael enjoys working with authors to convey their story and enhance their tale, breathe life into a character, and make the world of a narration come alive. As an audiobook narrator, she has recorded bestselling books, including titles nominated for the International Man Booker Prize and Waterstones Children's Book of the Year 2017.

A member of Equity and The Voice Over Network, Rachael is a passionate believer in continuous professional development and consistently attends training courses and networking events. With two beautiful daughters and one handsome husband, Rachael lives in West Sussex, England. When she isn't reading a book out loud for work, she can be found reading one for pleasure.