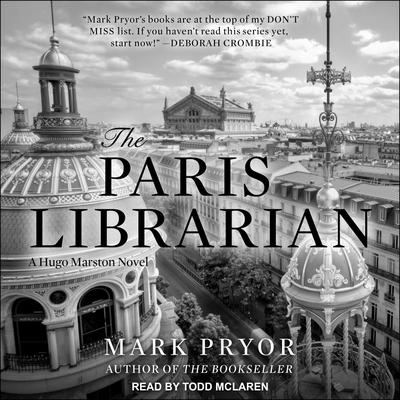 Hugo Marston's friend Paul Rogers dies unexpectedly in a locked room at the American Library in Paris. The police conclude that Rogers died of natural causes, but Hugo is certain mischief is afoot. As he pokes around the library, Hugo discovers that rumors are swirling around some recently donated letters from American actress Isabelle Severin. The reason: they may indicate that the actress had aided the Resistance in frequent trips to France toward the end of World War II. Even more dramatic is the legend that the Severin collection also contains a dagger, one she used to kill an SS officer in 1944. Hugo delves deeper into the stacks at the American library and finally realizes that the history of this case isn't what anyone suspected. But to prove he's right, Hugo must return to the scene of a decades-old crime.

Todd McLaren was involved in radio for more than twenty years in cities on both
coasts, including Philadelphia, San Francisco, and Los Angeles. He left
broadcasting for a full-time career in voice-overs, where he has been heard on more
than 5,000 TV and radio commercials, as well as TV promos; narrations for
documentaries on such networks as A&E, Discovery, and the History Channel; and films,
including Who Framed Roger Rabbit?