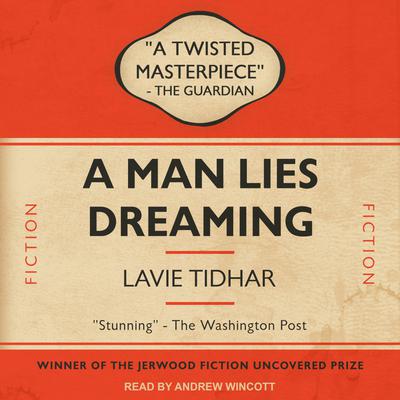 Since its original 2014 publication, A Man Lies Dreaming has been translated into multiple languages and gained a cult following for its dark humor, prescient politics, and powerful exploration of the impossibility of fantasy.

1939: Adolf Hitler, fallen from power, seeks refuge in a London engulfed in the throes of a very British Fascism. Now eking a miserable living as a down-at-heels private eye and calling himself Wolf, he has no choice but to take on the case of a glamorous Jewish heiress whose sister went missing.

It's a decision Wolf will very shortly regret.

For in another time and place a man lies dreaming: Shomer, once a Yiddish pulp writer, who dreams lurid tales of revenge in the hell that is Auschwitz.

Prescient, darkly funny, and wholly original, the award-winning A Man Lies Dreaming is a modern fable for our time that comes "crashing through the door of literature like Sam Spade with a .38 in his hand" (Guardian).

Lavie Tidhar is the author of the breakout Campbell and Neukom award-winning novel Central Station, which has been translated into ten languages. He has also received the British Science Fiction, Neukom Literary, and World Fantasy awards. Tidhar was born in Israel, grew up on a kibbutz, has lived in South Africa, Laos, and Vanuatu, and currently resides in London.