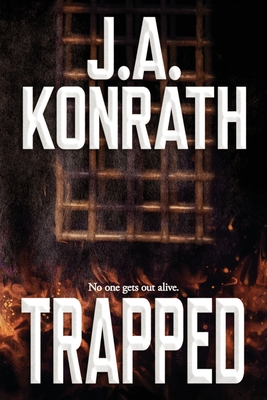 It was supposed to be a harmless camping trip. Six wayward teenagers who'd run into trouble with the law, and their court-appointed guardians, Sara and Martin Randhurst. Three nights on a small, deserted island off of Michigan's upper peninsula. A time to bond, to learn, to heal.

Then Martin told a campfire story about the island's history. Of the old civil war prison hidden in there, and the starving confederate soldiers who resorted to cannibalism to stay alive. Everyone thought it was funny. They even laughed when Martin pretended to be dragged off into the woods.

But Martin didn't come back. And neither did Sara when she went in search of him.

Then the laughter stopped.

The group soon began to realize that this deserted island wasn't so deserted after all. And perhaps Martin's ridiculous story had more truth to it than anyone thought.

What's the most horrifying thing you can imagine?

This is a hundred times worse...

TRAPPED by J.A. Konrath
It starts where other horror ends...

If you are a more sensitive (or adventurous) reader, the Konrath scale rates specific categories from 1 (lowest) to 10 (highest) to give you some idea if this is your kind of book.

This novel was previous published by JA Konrath under the pen name Jack Kilborn. Joe got rid of Kilborn. May he rest in peace.