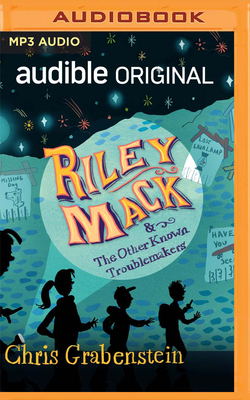 Riley Mack and the Other Known Troublemakers (MP3 CD)

In this middle grade Audible Original that's full of both humor and heart, a madcap gang of bold kid crusaders set off on an unforgettable adventure to thwart wrongdoers in their neighborhood.

What do you get when you add up one middle school bully, two bank robbers, 57 puppy-mill dogs, 4,000 missing dollars, and five daring troublemakers led by the incomparable Riley Mack? One crazy caper In this merry, mischievous romp, master storyteller Chris Grabenstein, the award-winning author of Escape From Mr. Lemoncello's Library, teams with a full-cast of audio talent to introduce Riley Mack, a one-of-a-kind 12-year-old hometown hero.

And if you listen closely, you'll catch a very special appearance from author Chris Grabenstein as the Casino Card Dealer and his wife, J.J. Meyers, who lends her voice to Madeira Mack.