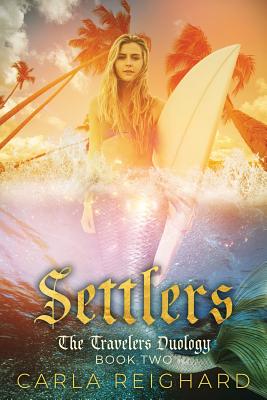 When she wakes up in a hospital, Lane knows losing the battle with a surfboard isn't the only thing that is wrong with her head. She's not sure what is worse; the amnesia from her accident, or the voice inside her mind that insists that she is being inhabited by a mermaid named Triana. Lane's refusal to accept her cohabitation is only one of the many problems Triana has to face in Settlers as she sorts through her jumbled memories of whom she knows and who she can trust. Esmerilla is still determined to dominate the world, and Triana must continue to share bodies with others while trying to save New Kyra and Earth. Despite having new allies, Triana still feels alone when she realizes that the only way to stop Esmerilla may require sacrificing everything. Follow Triana in this sequel to Travelers as she meets amazing women in history while fighting the enemy. With each new person she encounters, Triana realizes ordinary women can do extraordinary things.

Carla grew up in Colorado among more animals than humans. Her imagination was her main companion, so she began weaving tales before she could write. As an adult, Carla created a book as a gift for her niece, Elle. This was the birth of Elle's Magical Shoes, and her dream to become a published author.
or
Buy Here
Copyright © 2020 American Booksellers Association