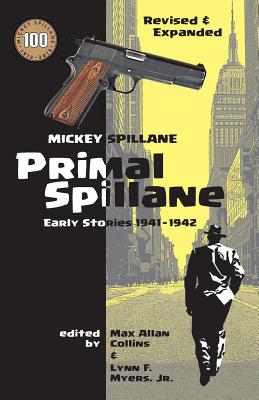 41 fast-moving short-short stories by the creator of Mike Hammer Revised and expanded with 14 new stories, including "A Turn of the Tide," a previously unpublished tale.

For his first novel, Mickey Spillane adapted his unsold comic book character Mike Danger. Changing Danger to Hammer, Spillane wrote the yarn that launched a major career -- I, the Jury But before he unleashed Mike Hammer on a world-wide audience, Spillane honed his craft writing terse, short-fiction for comic books, originally intended to fulfill an odd postal requirement. These "throw-away" stories became his literary boot camp, where he honed his story-telling ability.

Here, collected in an expanded edition, are the earliest short stories bylined Mickey Spillane ... all written between 1941 and 1942. Spillane's comic book career was interrupted by military service (he signed up the day after Pearl Harbor was attacked). After the war, when the fighter pilot returned to civilian life, he found Funnies, Inc. (his old studio) was gone, most artists and writers now sub-contracting work directly for the comic book publishers.

Now you have the opportunity to see a major mystery-fiction talent find his voice and develop his powerful storytelling skills, in a most unlikely venue -- with "filler" material in comic books. The 40 stories contained within this expanded edition demonstrate Spillane's future mastery of the tough-talking private detective and brutal criminals, while also displaying his versatility in other genres. In addition to hard-boiled crime, Spillane hammers out tales of ship wrecks, high-flying soldiers, a Lovecraftian mine-shaft, light-fingered con artists, overworked cub reporters, and a hapless exterminator. Some of the stories in the collection may frighten you, and a few will make you laugh out loud. But each one wraps up with the signature Spillane "socko finish."

The combined cost of the rare comic books in which these text pieces first appeared today would be more than that of a new Cadillac; but these short stories provide their own memorable rides. Their value as a training ground for the 20th Century's top crime-fiction writer is priceless when compared to the millions of fans across the world entertained by Mickey Spillane's prose.

Mickey Spillane and Max Allan Collins collaborated on numerous projects, including twelve anthologies, three films, and the Mike Danger comic book series. Spillane was the bestselling American mystery writer of the 20th century. He introduced Mike Hammer in I, the Jury (1947), which sold in the millions, as did the six tough mysteries that soon followed. The controversial P.I. has been the subject of a radio show, comic strip, and several television series, starring Darren McGavin in the 1950s and Stacy Keach in the '80s and '90s. Numerous gritty movies have been made from Spillane novels, notably director Robert Aldrich's seminal film noir, Kiss Me Deadly (1955), and The Girl Hunters (1963), in which the writer played his own famous hero. Collins has earned an unprecedented twenty-three Private Eye Writers of America "Shamus" nominations, winning for the novels True Detective (1983) and Stolen Away (1993) in his Nathan Heller series, and for "So Long, Chief," a Mike Hammer short story begun by Spillane and completed by Collins. His graphic novel Road to Perdition is the basis of the Academy Award-winning Tom Hanks/Sam Mendes film. As a filmmaker in the Midwest, he has had half a dozen feature screenplays produced, including The Last Lullaby (2008), based on his innovative Quarry novels, also the basis of Quarry, a Cinemax TV series. As "Barbara Allan," he and his wife Barbara write the "Trash 'n' Treasures" mystery series (recently Antiques Wanted). The Grand Master "Edgar" Award, the highest honor bestowed by the Mystery Writers of America, was presented to Spillane in 1995 and Collins in 2017. Both Spillane (who died in 2006) and Collins also received the Private Eye Writers life achievement award, the Eye. Lynn Myers has been a researcher for Max Collins for many years. A radio newsman, Myers has written about Spillane and his group of Spillane-style writers for Paperback Parade.
Loading...
or support indie stores by buying on