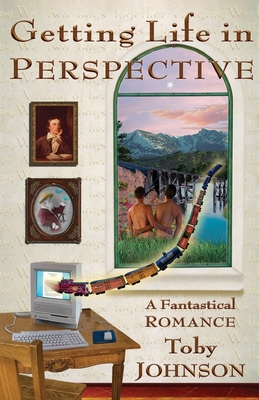 Getting Life in Perspective

Sweet, sexy, wise and thoroughly entertaining, this mytho-historical novel features two lovable apparitions from the late 1800s America. Their adventures in the novel-within-the-novel that the book is about interweave in a heart-warming story of youthful romance and mature, modern love. And the story offers an ageless life-affirming and gay-positive spiritual message ...along with just a touch of the Twilight Zone.

Toby Johnson, PhD and Kip Dollar, partners since 1984, ran Liberty Books, the lesbian/gay community bookstore in Austin for seven years in the 80s and 90s. They were the first male couple registered as Domestic Partners in Texas in 1993. They were legally married in 2018 on the day of their 34th anniversary. Johnson is a former Catholic monk and comparative religions scholar turned psychotherapist, gay activist, bookseller, editor and book designer, novelist and gay cultural commentator. He is author of six non-fiction titles that present spiritual wisdom he learned from his mentor and friend, renowned religions scholar Joseph Campbell, including Gay Spirituality: Gay Identity and the Transformation of Human Consciousness and Gay Perspective: Things our [homo]sexuality tells us about the nature of God and the Universe. Four gay genre novels, including Two Spirits: A Story of Life Among the Navajo (in collaboration with Walter L. Williams), are sweet adventure/romances woven through with wisdom and psychological insight. Johnson's spiritual/philosophical autobiography is titled: Finding Your Own True Myth: What I Learned from Joseph Campbell: The Myth of the Great Secret III. Toby Johnson has a webpage at tobyjohnson.com.
Loading...
or support indie stores by buying on