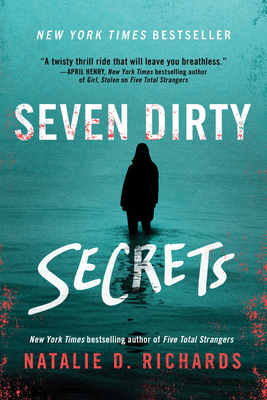 From the New York Times bestselling author of Five Total Strangers and "master of suspense" (BCCB), Natalie D. Richards, comes a pulse-pounding YA thriller about a girl who goes on a mysterious scavenger hunt, only to discover that someone knows her worst secret...and is out for blood.

One caused the fall. One did nothing. One saw it all.

One didn't care. One used their head. One played the hero.

One was left for dead.

On her eighteenth birthday, Cleo receives a mysterious invitation to a scavenger hunt. She's sure her best friend Hope or her brother Connor is behind it, but no one confesses. And as Cleo and Hope embark on the hunt, the seemingly random locations and clues begin to feel familiar.

In fact, all of the clues seem to be about Cleo's dead boyfriend, Declan, who drowned on a group rafting trip exactly a year ago. A bracelet she bought him. A song he loved. A photo of the rafting group, taken just before Declan drowned. And then the phone calls start, Declan's voice taunting Cleo with a cryptic question: You ready?

As the clock on the scavenger hunt ticks down, it becomes clear that someone knows what really happened to Declan. And that person will stop at nothing to make sure Cleo and her friends pay. Can they solve the hunt before someone else winds up dead?

My Secret to Tell

"Richards' knack for blending exciting, nail-biting plots with realistic and engaging characters results in yet another riveting page-turner." — Booklist

"A serious thriller for readers itching for a good mystery, and also a cautionary tale about abusive relationships and how they can escalate into violence." — School Library Journal

After years as a professional paper-pusher, NATALIE D. RICHARDS decided to trade in reality for a life writing YA fiction. She lives in Ohio (Go Bucks!) with her husband, three children, and a ridiculously furry dog named Yeti. This is her second novel. Visit her on Twitter @natdrichards or at nataliedrichards.com.
Loading...
or support indie stores by buying on