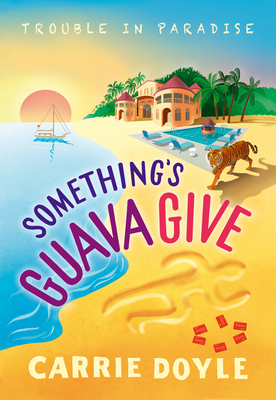 Something's Guava Give (Trouble in Paradise!)

Nothing ruins an ocean view like a body on the beach!

Plum Lockhart went out on a limb when she ditched her corporate job in New York City and moved to the Caribbean island of Paraiso. Now the head of her own villa broker agency, Plum spends her days chasing down clients and lounging on white sand beaches.

But the sweet life turns sour when a publishing heiress is found dead at the mansion of an eccentric tycoon, Dieter Friedrich. Even worse, Plum's old colleague cashes in a favor and asks her to investigate. It looks like she'll need to fit a murder case into her already jam-packed schedule!

Friedrich is known for his shady dealings, but he's not the only bad apple on the island—Plum will have to contend with a scheming millionaire, a sleazy rockstar, and devious B-list celebrities. And joining Plum once again is Juan Kevin Munoz, the distractingly gorgeous Director of Security. Despite the sparks between them, they'll need to stay focused on the case—there's a murderer hot on their heels!


Praise For Something's Guava Give (Trouble in Paradise!)…

Carrie Doyle is the best-selling author of multiple novels and screenplays that span many genres.

A born and bred New Yorker, Carrie has spent most of her life in Manhattan, with the exception of a six-year stint in Europe (Russia; France; England) and five years in Los Angeles. A former Editor-in-Chief of the Russian edition of Marie Claire, Carrie has written dozens of articles for various magazines. She is also a screenwriter, and her movie Intern (co-written with Jill Kargman) premiered at the Sundance Film Festival.

Carrie currently splits her time between New York and Long Island, with her husband and two teenage sons.