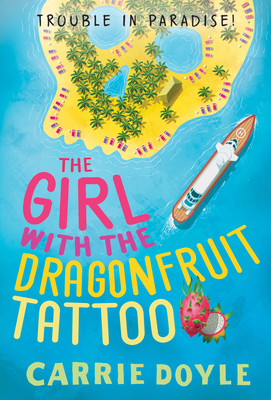 The Girl with the Dragonfruit Tattoo (Trouble in Paradise!)

Sometimes you have to rock the boat to catch a killer!

On the tropical island of Paraiso, Plum Lockhart has a new zest for life. Her villa rental company is growing like a weed, she's solved a couple of pesky murders, and things with her long-time crush are finally starting to heat up.

Plum does sometimes miss her sparkly life in the Big Apple, so she's thrilled when she gets an invite to dinner on the yacht, where she can mingle with famous singers, up-and-coming stars, society swans, and billionaires. After a few hours on the boat, Plum is less than impressed with celebrity set and when a server tries to pull her aside to confide a secret, she wonders what else may be lurking beneath the surface.

Two days later, one of the servers from the yacht—a girl with a dragonfruit tattoo—washes up dead, and Plum's sweet bit of paradise quickly goes sour. As the ship prepares to set sail across the Caribbean, Plum hops onboard to investigate the case, undercover. But the best laid plans turn deadly as it becomes clear that everyone on the boat has a motive and Plum must sleuth out the killer before she becomes the next victim...

Carrie Doyle is the best-selling author of multiple novels and screenplays that span many genres.

A born and bred New Yorker, Carrie has spent most of her life in Manhattan, with the exception of a six-year stint in Europe (Russia; France; England) and five years in Los Angeles. A former Editor-in-Chief of the Russian edition of Marie Claire, Carrie has written dozens of articles for various magazines. She is also a screenwriter, and her movie Intern (co-written with Jill Kargman) premiered at the Sundance Film Festival.

Carrie currently splits her time between New York and Long Island, with her husband and two teenage sons.