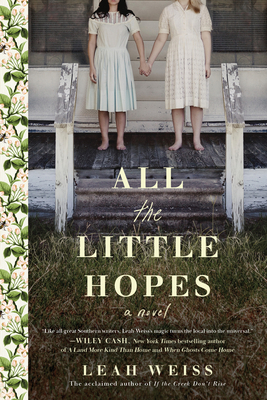 All the Little Hopes

"Will break your heart, but Leah Weiss's beautiful writing will sew it back together again" —Wiley Cash, New York Times bestselling author

A Southern story of friendship forged by books and bees, when the timeless troubles of growing up meet the murky shadows of World War II.

Deep in the tobacco land of North Carolina, nothing's been the same since the boys shipped off to war and worry took their place. Thirteen-year-old Lucy Brown is precocious and itching for adventure. Then Allie Bert Tucker wanders into town, an outcast with a puzzling past, and Lucy figures the two of them can solve any curious crime they find—just like her hero, Nancy Drew.

Their chance comes when a man goes missing, a woman stops speaking, and an eccentric gives the girls a mystery to solve that takes them beyond the ordinary. Their quiet town, seasoned with honeybees and sweet tea, becomes home to a Nazi prisoner-of-war camp. More men go missing. And together, the girls embark on a journey to discover if we ever really know who the enemy is.

Lush with Southern atmosphere, All The Little Hopes is the story of two girls growing up as war creeps closer, blurring the difference between what's right, what's wrong, and what we know to be true.


Praise For All the Little Hopes: A Novel…

"Small town North Carolina during WWII is brought vividly to life with German prisoners, missing husbands, and hidden stories. All the Little Hopes is abuzz with fascinating characters—Aunt Fanniebelle, Trula Freed, and especially Bert and Lu, two very different girls on the cusp of adulthood, learning about life’s mysteries as they play Nancy Drew and investigate three puzzling disappearances. Lush, poetic prose, characters you’ll not forget, and immersion in a past that has lessons for today make this a compelling read." — Vicki Lane, author of And the Crows Took Their Eyes and the Elizabeth Goodweather Appalachian Mysteries

"All the Little Hopes is as warm-hearted as the sun that beats down on Lu's family's tobacco fields. With feisty heroines and a fascinating yet little-known piece of American history as a backdrop, this is a coming-of-age story with a mystery at its heart. Yet the novel's crowning achievement is Weiss's creation of the Browns - a family that, in keeping with the best literary traditions, every reader will long to be a part of." — Kate Moore, author of the New York Times bestseller The Radium Girls and The Woman They Could Not Silence

"Like all great southern writers, Leah Weiss's magic turns the local into the universal. All the Little Hopes is both a deep-dive into the life of a North Carolina town during WWII and a national portrait of an era with all of its attendant glories and pains. I love this coming-of-age novel - its portrayal of friendship, the complications of family, the threats that outsiders can bring. Lucy Brown and Allie Bert Tucker will break your heart, but Leah Weiss's beautiful writing will sew it back together again." — Wiley Cash, New York Times bestselling author of A Land More Kind than Home and When Ghosts Come Home

"Wrapped in hope and mystery, this beautifully crafted story, set under a warm North Carolina sun, is full of heart. You won't want to miss this one." — Kathleen Grissom, New York Times bestselling author of The Kitchen House and Glory Over Everything

"With her latest novel All the Little Hopes, Leah Weiss confirms the place she’s earned among top-notch historical fiction writers. Her thrilling, coming-of-age story of two young girls in the tobacco country of the Carolinas, growing up in the shadow of World War II, is compelling, alarming, and heart-breakingly satisfying. It grippingly explores the mysteries of one of my favorite themes: Who can really be trusted when the chips are down?" — David Gillham, New York Times bestselling author of City of Women and Annalies

"Leah Weiss has done it again. Another powerful, masterly observed story. This time, firmly setting us down in tobacco land North Carolina with two teenaged girls at its heart and told in language that is uniquely Leah's. I read the novel with my jaw dropped open. For Leah’s fans, prepare to be thrilled again. For future ones, get set to be." — Bren McClain, author of One Good Mama Bone

"All the Little Hopes is the kind of wise, compassionate and deeply empathetic novel that we all need right now. In this heartening and heartrending book, Leah Weiss embodies a whole world in her affecting portrait of a small North Carolina tobacco farming community turned upside down by the loss and hardship visited upon its inhabitants during World War II. It’s a novel with an irresistible emotional momentum, as we follow all the ways its characters cope with a war come home. Weiss’s lyrical sentences are in themselves little wonders, tugging us along, delivering us to one surprising place after another and, in so doing, somehow restoring us to ourselves." — Tommy Hays, author of The Pleasure Was Mine and In the Family Way, Retired Director of the Great Smokies Writing Program and Lecturer Emeritus at University of North Carolina Asheville

"I fell in love with Leah Weiss’s debut, If the Creek Don’t Rise, and have been waiting with toe-tapping anticipation for the release of All the Little Hopes. Set deep in tobacco country in North Carolina, Lucy Brown and Allie Bert Tucker capture readers hearts and won’t let go. Weiss richly draws characters so vivid readers feel they are walking the tobacco fields of Riverton, North Carolina. We taste the deliciously rare purple honey, sing along with Glenn Miller, and cheer as Lucy and Bert piece together clues and solve a mystery fit for the pages of a Nancy Drew novel." — Renea Winchester, author of Outbound Train

LEAH WEISS is a Southern writer born in North Carolina and raised in the foothills of Virginia. Her debut novel If the Creek Don’t Rise was released in August of 2017. Her short stories have been published in The Simple Life magazine, Every Day Fiction and Deep South Magazine. You can contact her on her website leahweiss.com.

1. Lucy’s mother points out that language is meant to communicate, not separate, which discourages Lucy from overusing her enormous vocabulary. Throughout the book, how do you see language used to communicate? To separate?

2. What do you think of Bert’s desire to stay a girl instead of growing into a woman? How do we see Bert and Lucy accept growing up throughout the book? What are the chief differences you see between childhood and adulthood back in the 1940s as compared to today?

3. Describe the role of the Browns in their community. What are the broad effects of being a bibliophile?

4. Bert tends to blame herself when things go wrong—her mother dying, her father sending her away, Violet locking her out. Why do you think that is? Is it more of a female trait? Are there things you blame yourself for that really aren’t your fault?

5. What do you think about the mystery of Trula Freed? Was her magic plausible? Have you ever had an experience with a spiritualist or medium?

6. Lucy and Bert argue about treating Nancy Drew like a real person. Can you think of any literary characters that you wish were real or who felt as real to you?

7. Though purple honey in North Carolina is rare but real, what role does it play in the book? Did it arrive just to cure the mysterious flu, or is it a symbol for something larger?

8. Whiz Mayhew comes home from the war with what we might now call PTSD, and his homecoming is difficult. In his drunken state he confesses that the Nazis didn’t shoot him when given a chance because they didn’t think he was worth it. What was he confessing in that statement? How did his community help him heal? Do we have better options today to help soldiers with PTSD?

9. Describe the relationship between the Riverton community and the German POWs. What effect does Terrell Stucky have on the reputation of the POWs? How do the Germans come to be an accepted part of the town?

10. When Bert was almost compromised, her greatest sorrow was that Frankie Tender never asked her name. Discuss the importance of that missing question and the consequence for Frankie Tender. If he had asked her name, would the evening have ended differently or not?

11. Helen refuses to interact with the Germans in any capacity. What do other characters think of her stubbornness? What does her stubbornness cost her? Do you think you would be as resistant in her place?

12. During her father’s funeral, Bert realizes how much she’s changed since she left home. Do you agree with her sister that she doesn’t belong to the mountains anymore? How is “home” defined throughout the book?

13. None of the vanished men are particularly missed, and each presented a certain kind of danger to the community. How does Larry Crumbie’s domestic abuse compare to Frankie Tender’s callous seduction? To Terrell Stuckey’s hate mongering and murder? Do you think these men deserved their fates?

14. Did Lucy, Bert, and Irene do the right thing when they found Tiny Junior’s souvenirs? Would you have done the same?

15. What do you think comes next for Lucy and Bert and the rest of the Brown family? How do you think their experiences and decisions will affect their futures?