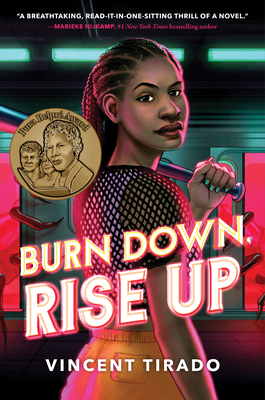 Burn Down, Rise Up

Mysterious disappearances. An urban legend rumored to be responsible. And one group of friends determined to save their city at any cost. Stranger Things meets Jordan Peele in this utterly original debut from an incredible new voice.

For over a year, the Bronx has been plagued by sudden disappearances that no one can explain. Sixteen-year-old Raquel does her best to ignore it. After all, the police only look for the white kids. But when her crush Charlize's cousin goes missing, Raquel starts to pay attention—especially when her own mom comes down with a mysterious illness that seems linked to the disappearances.

Raquel and Charlize team up to investigate, but they soon discover that everything is tied to a terrifying urban legend called the Echo Game. The game is rumored to trap people in a sinister world underneath the city, and the rules are based on a particularly dark chapter in New York's past. And if the friends want to save their home and everyone they love, they will have to play the game and destroy the evil at its heart—or die trying.


Praise For Burn Down, Rise Up…

"A queer, heart-pounding thrill ride. Fans of Attack the Block and Vampires vs. the Bronx: prepare for your newest obsession." — Ryan Douglass, New York Times bestselling author of The Taking of Jake Livingston

"With wonderful characters, nighttime chills, and a terrifying adventure at the heart of it all, Burn Down, Rise Up is a breathtaking, read-it-in-one-sitting thrill of a novel." — Marieke Nijkamp, #1 New York Times bestselling author of This Is Where It Ends

"Prepared to be thrilled—a creepy, mysterious rollercoaster of a novel that had me hooked from the explosive start. Tirado packs both action and heart into this timely story." — Natasha Ngan, New York Times bestselling author of the Girls of Paper and Fire trilogy

"A deadly game meets social commentary in an ode to the Bronx." — Kirkus

"Clever, tying into ripped-from-the-headlines police violence in the present-day world..." — Bulletin of the Center for Children's Books

"A speculative novel that blends elements of horror with a history of gentrification and systemic racism..." — Publishers Weekly

"Readers will be on the edge of their seats and will have the chance to explore societal issues in a new way to answer the question “What are monsters?” when reading this book" — School Library Journal, STARRED review

Vincent Tirado is a non-binary Afro-Latinx Bronx native. They ventured out to Pennsylvania and Ohio to get their Bachelor’s degree in biology and Master’s degree in bioethics. They have had short stories published in Desert Rose Lit Mag and FIYAH! Magazine.