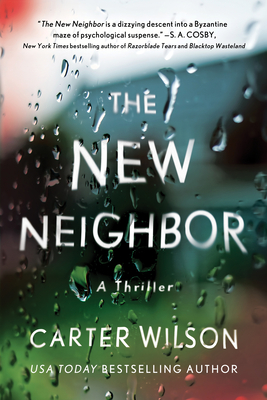 "The New Neighbor is a dizzying descent into a Byzantine maze of psychological suspense. Carter Wilson proves once again why he is one of the best most inventive thriller writers working today." — S. A. Cosby, New York Times bestselling author of Razorblade Tears and Blacktop Wasteland

Is today the best day of his life… or the worst?

Aidan Marlowe is the superstitious type—he's been playing the same lottery numbers for fifteen years, never hitting the jackpot. Until now. On the day of his wife's funeral.

Aidan struggles to cope with these two sudden extremes: instant wealth beyond his imagination, and the loss of the only woman he's ever loved, the mother of his twin children. But the money gives him and his kids options they didn't have before. They can leave everything behind. They can start a new life in a new town. So they do.

But a huge new house and all the money in the world can't replace what they've lost, and it's not long before Aidan realizes he's merely trading old demons for new ones. Because someone is watching him and his family very closely. Someone who knows exactly who they are, where they've come from, and what they're trying to hide. Someone who will stop at nothing to get what they want…

"A smashing story about families and secrets and all the things you don't want to know about the people closest to you. Read it!"—David Bell, USA Today bestselling author for The Dead Husband

The Dead Girl in 2A


Praise For The New Neighbor: A Thriller…

"The New Neighbor is a dizzying descent into a Byzantine maze of psychological suspense. Carter Wilson proves once again why he is one of the best most inventive thriller writers working today." — S. A. Cosby, New York Times bestselling author of Razorblade Tears and Blacktop Wasteland

"Some truly frightening scenes lead to a gripping and satisfying conclusion, but not before a twist that will leave readers’ heads spinning. Marlowe is memorable —single dads in thrillers aren’t that common—but mainly he will stay with readers because of his offbeat vulnerability and the determination that shines through his grief. Wilson’s (The Dead Girl in 2A) unusual psychological thriller is one for fans of Stephen King who are open to reading mysteries." — First Clue

"I can never resist a book with a well-written, unreliable narrator, and Carter Wilson nails just that in his tautly written thriller, The New Neighbor. I couldn’t bear to put this page-turner down until I figured out every single detail in Wilson’s suspenseful and twist-ridden story of loss, mourning, and new starts that asks if money can ever buy happiness and even if it does—at what cost?" — Emily Bleeker, Wall Street Journal and Amazon Charts bestselling author

"A truly suspenseful and gripping read. I was filled with anxiety and on the edge of my seat throughout. Bravo!" — Alice Hunter, author of The Serial Killer’s Wife

"Damn you. Wilson, I was up all night with this book. The mysteries of Bury are perfectly placed, the tension is thick enough to drown in, and the pages fly by. Brilliant escapism. I can't recommend it highly enough." — Stuart Turton, internationally bestselling author of The Seven Deaths of Evelyn Hardcastle and The Devil and the Dark Water

"A disquieting psychological thriller from Wilson...skillfully piles on the creepiness, ratcheting up the tension as Aidan’s world starts spinning out of control. Megan Miranda fans will be satisfied. " — Publishers Weekly

"Eerie, disturbing, and violent, Wilson’s psychological thriller packs a real punch, with a shocker of an ending." — Booklist

"The New Neighbor are signing up for a ride on a frenetic and terrifying rollercoaster: it’s a top notch domestic thriller." — Criminal Element

Carter Wilson is the USA Today bestselling author of eight critically acclaimed, standalone psychological thrillers. He is an ITW Thriller Award finalist, a five-time winner of the Colorado Book Award, and his works have been optioned for television and film. Carter lives outside of Boulder, Colorado.