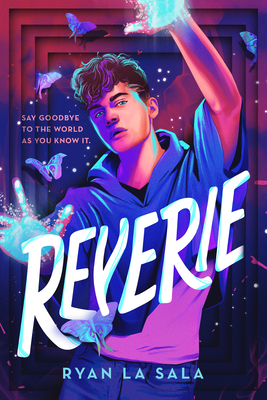 A few weeks ago, Kane Montgomery was in an accident that robbed him of his memory. The only thing he knows for certain is that the police found him half-dead in the river. The world as he knows it feels different—reality seems different. And when strange things start happening around him, Kane isn't sure where to turn.

"Readers will be guessing to the end of this wild and weird and crazy ride, and they'll love every minute of it." — Sam J. Miller, Nebula-Award-winning author of The Art of Starving

"Smart, sensitive, and unabashedly queer, this atmospheric debut reshaped my heart. Reverie has the makings of a YA sensation." — Amy Rose Capetta, author of The Brilliant Death and The Lost Coast

"Reverie is a dreamy escapist fantasy that will keep you entertained and on your toes. With beautiful prose, fantastic landscapes, and a drag queen sorceress who I'd let step on me any day, you won't want to miss this debut." — Tara Sim, author of the Timekeeper trilogy

"Ryan La Sala's debut novel is a fever nightmare of epically queer proportions. Told in a commanding voice and with both wit and style, Reverie is the kind of magical, twisty adventure that made me feel at home. This novel is truly a dream come true, and I can't wait for queer teens to get lost in its hypnotic tale." — Mark Oshiro, author of Anger is a Gift

"A unique addition to YA collections that represents diversity in the book's characters and the author." — School Library Connection

"Joyously, riotously queer... The themes of creating one's own reality and fighting against the rules imposed by the world you're born into will ring powerfully true for many young readers." — Kirkus Reviews

"A unique, clever fantasy with a strong protagonist." — Booklist

"With its fresh take on a diverse cast, its queer-power narrative, and its unique rendering of dream magic, this fantasy offers readers something wonderfully new and engaging...a gem of a novel that is as affirming as it is entertaining." — The Bulletin of the Center for Children's Books

"A spectacular, imaginative tale unlike anything you've read all year... You don't want to miss this book!" — Paste Magazine

"[An] inclusive and dazzling debut." — POPSUGAR

"Reverie is easy to fall in love with. La Sala is an exquisite wordsmith and he puts those talents on display as he crafts the intricacies of the reveries and the astonishment of the rainbow-colored magic battles. Reverie makes a strong, late-season case as one of the best young adult fantasies of the year." — Tor.com

"I don't know that I've ever encountered a book quite like Reverie before. It wears its queerness and its narrative weirdness on its sleeve and it paints outside the genre box, even as it gleefully pulls tropes out of that same box and flings them around like confetti. It feels like something fresh and different, and I'll be fascinated to see if it leads the way for a new YA trend. Queer, dream-bending mystery fantasy may well be the next big thing, and I'm here for it!" — NPR.org

"Stunning and terrifying to behold." — Hypable

"La Sala created a work that toys with fantasy — as in dreams contrasted with reality — and the fantasy genre itself, which for so long has had a narrow concept of who gets to be heroes. "Reverie" kicks open the doors to new voices, rainbow fire and all." — The ARTery (WBUR)

"Powerful... [La Sala] is a model for what an authentic queer writer can be, and it comes through in his debut." — Medium

Ryan La Sala grew up in Connecticut, but only physically. Mentally, he spent most of his childhood in the worlds of Sailor Moon and Xena: Warrior Princess, which perhaps explains all the twirling. He studied Anthropology and Neuroscience at Northeastern University before becoming a project manager specialized in digital tools. He technically lives in New York City, but has actually transcended material reality and only takes up a human shell for special occasions, like brunch, and to watch anime (which is banned on the astral plane). He is the author of Reverie and Be Dazzled. You can visit him at ryanlasala.com.
Loading...
or support indie stores by buying on