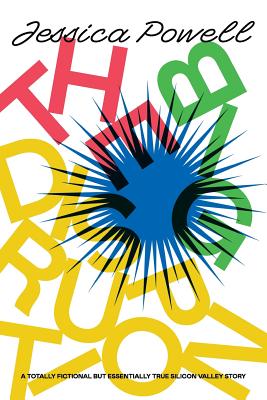 Something is fishy at Anahata--and it's not just the giant squid that serves as a mascot for the tech company. A prince in exile is working as a product manager. The sales guys are battling with the engineers. The women employees are the unwitting subjects of a wild social experiment. The VPs are plotting against each other. And the yoga-loving, sex-obsessed CEO is rumored to be planning a moon colony, sending his investors into a tizzy. Is it all downhill from here for the world's largest tech company? Or is this just the beginning of a bold new phase in Anahata's quest for global domination?

"Jessica Powell is everything you want in a writer about power and money and lunacy in modern day Silicon Valley. She is an insider who has come outside, an insightful chronicler of the ridonkulous foibles of the digital overlords and a deft teller of tales. She was in the room and has managed to gleefully open its doors and let us see the antic circus inside. Such a view has never been more important as tech's damage becomes more and more clear."

"The best books typically prompt us to laugh or think or learn something about the world that we might not have otherwise known. You will do all these things while reading this book, and more. This is a wild, incisive, and incredibly necessary look at the way that Silicon Valley works, and a wonderfully good read as well. The Big Disruption is a book that explains and defines this moment--the kind of book many of us have been waiting for."

"From years of dealing with Jessica Powell during her time at Google, I knew she was witty. But I am sitting at a Starbucks laughing out loud like an idiot at her very smart new book The Big Disruption, a brilliant and funny satire of the male, engineer-driven culture of Silicon Valley where the leaders are cryptic and obtuse to reality."