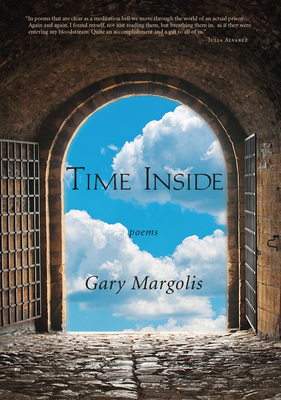 Time Inside, Gary Margolis’ seventh book of poems, takes us behind the walls, through the metal gates of his experience leading a poetry workshop for inmates in a maximum security correctional facility, and back out to the surrounding worlds of love’s nature and memory's hold and release of us. Emblematic of Margolis' writing, sometimes in phrases, sometimes in sentences, Margolis always has an ear for a line's turning. Each poem finds its centering image that arrests the heart. With clarity, humor, and a counselor's and poet's eye, Margolis sees the keys and latches of dark and light inside our time.

An award-winning poet and counselor, Gary Margolis is Emeritus Executive Director of College Mental Health Services and Associate Professor of English and American Literatures at Middlebury College. He was a Robert Frost and Arthur Vining Davis Fellow and has taught at the University of Tennessee, Vermont, Bread Loaf, and Green Mountain Writers’ Conferences. His poem “The Interview” was featured on National Public Radio’s The Story, and after the 2004 World Series he read his poem “Winning the Lunar Eclipse”  on Boston’s ABC Channel 5.

Dr. Margolis was awarded the first Sam Dietzel Award for Mental Health Practice in Vermont by the Clinical Psychology Department of Saint Michael's College. His clinical articles have appeared in Journal of American College Health Association, Adolescence, Ladies Home Journal, and Runner’s World Magazine. He has been interviewed for his work with college students by Time Magazine, ABC, and CBS News. His recent books include Seeing the Songs: A Poet’s  Journey to the Shamans in Ecuador, a memoir, and Runner Without a Number, a book of poems.