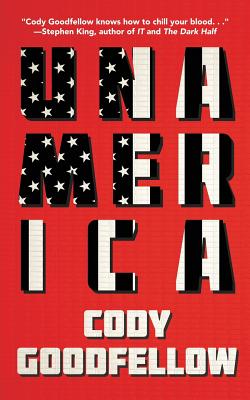 "Cody Goodfellow knows how to chill your blood. . ." --STEPHEN KING, author of It and The Dark Half

Buried half a mile beneath the desert sands of the US-Mexico border, exists a secret city that holds the promise of everything that draws refugees and immigrants to America--liberty, luxury and excess. . .

In this Terminal Autonomous Zone, two prophets will rise--one, a reckless seeker who believes the psychedelic mushrooms he's discovered will spur a revolution in human consciousness; the other, a fire-and-brimstone preacher endowed by strange angels with a power that heals the sick and raises the dead--and as rival factions emerge around them, a march toward war begins . . .

"Unamerica is madness. Timely, familiar, brilliant--but most of all, terrifying--madness." --ROB HART, author of The Warehouse

"Goodfellow satirizes the excesses of capitalism, religion, and drug culture in this macabre dystopian fantasy... a wild, trippy journey through a horrifying nightmare version of America." --PUBLISHERS WEEKLY

"A gripping novel that lives up to the hype." --THIS IS HORROR