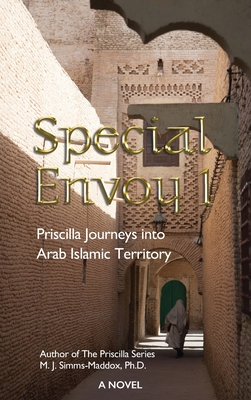 Priscilla J. Austin has been in training as a CIA agent since returning from her first time in Africa in the summer of 1986. Apart from continuing her public relations consultancy, "an excellent cover," her supervisor notes, she still has no notion of what the agency wants her to do. Meanwhile, her public profile as "an ordinary woman makes good" has been enhanced by her work as spokesperson for the Bernhardts of Bow Lake and her work with the Hollingsworth Presidential Election Campaign. But Priscilla does have her foibles-her tendency to be unpredictable and her phobias-which could threaten the success of any mission. Regardless, agency officials know that only someone of Priscilla's particular personality and individual characteristics can complete the impending mission successfully. Even so, they give her a dry run.

The opening scene is of Priscilla starting her regularly scheduled meeting with the Bernhardt Foundation for Boarding Schools for Zimbabwean and South African Girls. She is at a conference center in Harare, where, before long, the ceiling caves in, and some mysterious-looking men drop down into the room, clinging onto ropes. The men are not there to rescue her, either. While Priscilla takes cover under the conference table, she reminisces about how she got there in the first place.

On the heels of her wedding, she'd been contacted for her first assignment "in service to her country." Her trial run was to deliver an official sealed envelope to the emirs in the United Arab Emirates. Apart from proving herself to the CIA, she'd also wanted to shake off pressure from her forthcoming wedding, which was less than a week away.

Despite a bout with one of her phobia, her courier mission had been a success. She then led the top-of-the-line to be the special envoy. It was then that she'd headed off to Harare to conduct the board meeting, when onboard her flight she learned, for the first time, what the CIA had wanted of her as a special envoy. She hadn't even minded dumping her husband for the trip, which proved how hardcore she was. And although her first experience in the region had made her a heroine, she was wholly unaware that remnants of the South African Nationalists Movement's Patrol Guard-the enforcement arm of the gazillion-dollar diamond, gold, and platinum conglomerate-still existed.

But, unexpectedly, her trip to Harare had been put off. It was time to initiate her special envoy mission, and it was clear that she had been surprised by it, too, and so soon.

Nevertheless, as Priscilla prepared to meet with the first delegation, no one could have prepared her for what so easily could have aborted the mission. One can feel her disbelief when Abdul-Hakim approaches her in an "uncharacteristic manner." Yet, she pushes past her pain and moves forward with the meeting as if nothing had ever even happened. It was then that she'd resumed her trip to Harare.

So it had been after starting her board meeting at the conference center in Harare that things had begun to fall apart, literally. When the ceiling in the conference room caved in, this time, unlike her experience with Abdul-Hakim, Priscilla declares, "I'll be damned if I'm the damsel in distress." Henceforth, there is no letting up; so, too, does Priscilla's ability to fend for herself.

Along the way, from Harare to Amman-her final destination, Priscilla tackles gruesome circumstances. At the same time, a special ops' unit of the CIA engages the very terrorists that are trying to obstruct her mission.

Although Special Envoy 1 can be read as a standalone, it might be useful first to read the trilogy that precedes it: Priscilla Engaging in the Game of Politics, Mystery in Harare, and Three Metal Pellets.