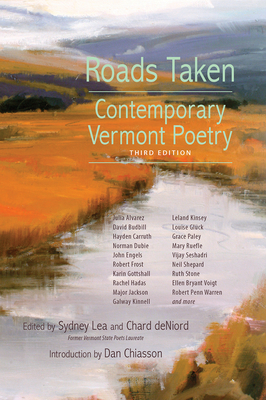 With its mystical landscape and fiercely self-reliant citizenry, Vermont has inspired poets from its earliest days. This anthology of contemporary Vermont poets represents a wide range of accomplished voices?both young and old, both renowned and relatively unestablished. Their poems reverberate with what W.H. Auden called “memorable speech” in a wide variety of forms and subjects. While there is no such thing as a particular brand of Vermont poetry, the poems in this volume claim Vermont as their place of origin, bearing witness to the remarkably rich and ongoing legacy of the state’s poetic tradition.

Sydney Lea was Vermont's 2011-2015 Poet Laureate. He has published numerous books in multiple genres, among them Pursuit of a Wound, a finalist for the 2001 Pulitzer Prize for poetry. He is the founder of New England Review and has been awarded Rockefeller, Fulbright, and Guggenheim fellowships; he has taught at Dartmouth, Yale, Wesleyan, Vermont, and Middlebury colleges, as well as at Switzerland's Franklin College and Budapest's National Hungarian University. His stories, poems, essays and criticism have appeared in The New Yorker, The Atlantic, The New Republic, The New York Times, Sports Illustrated and many other periodicals, as well as in more than fifty anthologies. He lives in Newbury, Vermont, and he is active both in community literacy efforts and in environmental conservation.

Chard deNiord is the Poet Laureate of Vermont and author of five books of poetry, most recently Interstate, The Double Truth, and Night Mowing. His book of essays and interviews with seven senior American poets (Galway Kinnell, Ruth Stone, Lucille Clifton, Donald Hall, Robert Bly, Jack Gilbert, and Maxine Kumin) titled Sad Friends, Drowned Lovers, Stapled Songs, Conversations and Reflections on Twentieth Century American Poets was published by Marick Press in 2011. His poems and essays have appeared widely in such journals and anthologies as The Pushcart Prize and Best American Poetry, the Kenyon Review, The New England Review, The American Poetry Review, The New Ohio Review, AGNI, The Harvard Review, The New York Times, Ploughshares, and Salmagundi. He is the co-founder and former program director of the New England College MFA Program in Poetry and a trustee of the Ruth Stone Trust. For the past 19 years he has taught English and Creative Writing at Providence College where he is Professor of English. He lives in Westminster West, Vt. with his wife, Liz.

Dan Chiasson is the author of four books, most recently a book of poems, Where’s the Moon, There’s the Moon (Knopf 2010). He is the poetry critic for The New Yorker, and a frequent contributor to The New York Review of Books. Chiasson was born and raised in Burlington, Vermont, attended Amherst College and received a PhD from Harvard University. He is a professor of English at Wellesley College.