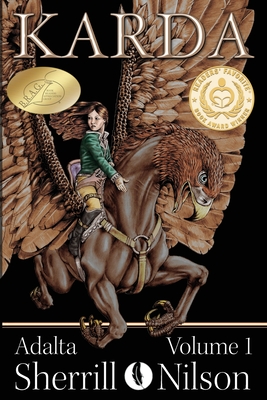 On the beautiful world Adalta, an ancient alien threat emerges.

Young Marta is dropped to the planet for her first secret mission alone. How will she succeed when she must open up to magic she doesn't believe in.

On this planet where the only weapons allowed are arrows and swords, Marta discovers a high-tech weapon she knows could only come from her ship. Someone is smuggling them to use in the bitter power struggle between two noble brothers. She knows she must stop this threat, and reluctantly joins forces with the handsome but arrogant Altan. As their connection grows, Marta struggles to keep her secret, and to keep the rule of not getting attached.

As tensions rise and the ancient threat grows, will Marta accept the frightening elemental magic powers Adalta wants to give her to save the planet she loves?

***** "I did not want to leave the world the author created. I am off to get the second book."

***** "This is an amazing road movie of a book, where the heroine sets of on a voyage of discovery across a fantastic new world, and in discovering the world she also discovers something of herself."

Sherrill Nilson used to raise horses. Now she writes about flying horses-with hawk heads and wicked talons. Author of the Adalta Series, she's been a cattle rancher, horse breeder, environmentalist, mother of three, traveler to exotic places-even a tarot card reader. She lived in Santa Fe and Ruidoso, NM, San Francisco, and Austin after leaving the hills of Eastern Oklahoma and her ranch. Now she's back in Tulsa where she started. She has a Ph.D. in East-West Psychology, and her studies opened her to the world of ancient myth and story. Writing all those many papers and her dissertation suited her. She loves science fiction and fantasy and is a prolific reader. One day she put down the book she just finished and thought, "I'm going to run out of books to read. I love imagined worlds. Why don't I create my own? One I'd like to fly away to." So she took a leap of faith and embarked on writing Karda and Hunter-the first two books in the Adalta series. She's now working on Falling, the third book, and lurking in the back of her mind is another series about the trees deciding whether or not to leave earth. She is also working on a series of short stories telling the Epic of Gilgamesh from a woman's perspective. She lives, writes, and reads SciFi/fantasy (and occasionally poetry) in Tulsa, Oklahoma-back where she started as the oldest of seven kids, (don't ask to drive) three of whom are writers. She doesn't have a dog, a cat, or even a bird, but she does have an old Volvo convertible and loves to drive around in her sunglasses with the wind blowing her hair. It's how she gets her vitamin D. You can reach her through SherrillNilson.com or email her at sherrill.nilson@gmail.com. She would like to hear from you because she wants to know what you think about her work. She says it makes her a better writer--and makes her write faster.
Loading...
or support indie stores by buying on