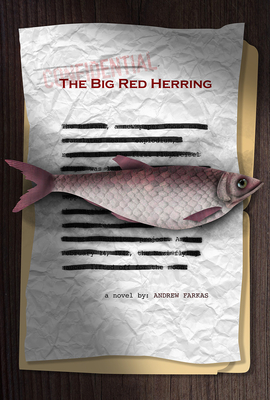 Fiction. The Crying of Lot 49, but funny. A Confederacy of Dunces, but sharp.
The Big Sleep, but on acid. In this latest work by Andrew Farkas, the United States and the Soviet Union were allies, not enemies. The moon landing was a hoax filmed by Stanley Kubrick. The Space Race and the Cold War were diversions enacted to cover up the biggest secret ever kept. But Wallace Heath Orcuson (Wall to his friends) has more immediate problems to deal with. He's just woken up in an apartment he's never seen before. There's a dead body under his couch. It's his girlfriend's husband, a man named "Senator" Kipper Maris. Meanwhile, at a donut shop, a radio narrator, who's been forced to adopt the name Edward R. Murrow, reads Wall's story. He hates it. He wants to change it. The problem: Murrow is a narrator, not a writer, and the penalty for altering a manuscript is death. Luckily for Murrow, his boss, "Senator" Kipper Maris, was recently murdered. So maybe no one will notice. Or maybe there's a reason for the rule. But you can't find out what's in Pandora's box until it's opened, right?
Who wants to see what's inside?