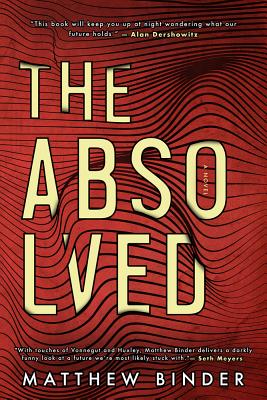 It’s 2036. Henri is a wealthy physician, husband, father, and serial philanderer. He is also one of the relatively few people to still have a job. Automation and other technological advances have led to unemployment so severe that many people are no longer expected to work and are now known as The Absolved. Meanwhile, it’s election season, and a candidate from a radical fringe party called the Luddites is calling for an end to the Divine Rights of Machines. After Henri is displaced from his job, two Luddite sympathizers—whom Henri has befriended at his local bar—frame him for an anti-technology terrorist act. The prospect of Henri’s salvation comes at the cost of foregoing his guiding principles in life. This new vision for the world, after all, just might prove better than the technological advancements that, paradoxically, have left humanity out in the cold.

Matthew Binder is the primary member of the recording project, Bang Bang Jet Away and he is the author of High in the Streets. He lives in New York City.

Praise For The Absolved…

“With touches of Vonnegut and Huxley, Matthew Binder delivers a darkly funny look at a future we’re most likely stuck with.”  —Seth Meyers

“As humans struggle to retrieve their humanity from the robots who have taken their jobs and self-worth, one man—a doctor— has the opportunity to be a hero or villain. This book will keep you up at night wondering what our future holds.”  —Alan Dershowitz

"A blistering account of an America with few jobs and no purpose. This is a funny, fast-paced novel with its finger on this country's dying pulse."  —David Burr Gerrard, author, The Epiphany Machine

“In The Absolved, Matthew Binder has delivered us a devastating portrait of where we are imminently headed. Through his narrator Henri's fopperies, ranging from the affair to the revolution, Binder's novel is an ode to the imperfect and hilarious beauty of being human.”  —Hannah Lillith Assadi, author, Sonora

“Binder offers us a parable for a future that could as well be our present, neither of which we should be proud to call our own. Eerie in its insight, lacerating in its wit, merciless in its conclusions, this is a book liable to become an instant classic. Binder points the finger in these pages, and names the names. He is an oracle for our time.”  —D. Foy, author, Made to Break

“The Absolved shines an unapologetic spotlight on the malaise and absurdity of an America whose soul has been sucked out by an over-dependence on artificial intelligence — a journey that feels as poignant and honest in today's world as it does in Binder's techno-dystopia.”   —John Cunningham Ph.D., AI professor, Columbia University

"An enjoyable, witty read that ponders where automation might actually take us, not just where we want it to go." —Jennifer M. Schlau, Library Journal
or
Not Currently Available for Direct Purchase
Copyright © 2020 American Booksellers Association