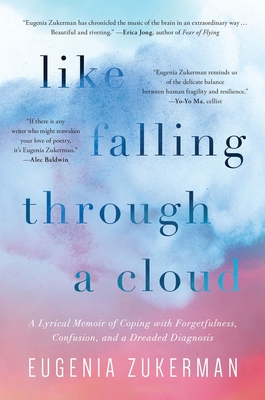 What if the dreaded world of Alzheimer’s was also a world of emotional discovery? Eugenia Zukerman’s poetry and simple prose, both heartbreaking and ultimately inspirational, ushers the reader into her world as she unflinchingly examines familial loyalties, moments from her past and present, and the need to face an uncertain future due to the diagnosis of a condition that she truly hopes “will remain unnamed.”

Flutist, writer, artistic director of major music series, television journalist, educator and internet entrepreneur, Zukerman addresses her “lapses and losses” as she confronts and deals with a future under the shadow of her Alzheimer’s diagnosis.

Touching, honest, and fearlessly heartfelt, Like Falling Through a Cloud recounts Zukerman’s discovery, consultations, and diagnosis, all while navigating the death of her 103-year-old mother, a performance at the Kennedy Center, and the consolidation of her life via a full-time move to upstate New York. As she finds strength in family love, self-examination, and the enduring power of creating music, Zukerman teaches us the importance of living in the now, while accepting that what comes next may remain a mystery.

Praise For Like Falling Through a Cloud: A Lyrical Memoir…

“In Like Falling Through a Cloud, Eugenia Zuckerman gives her reader privileged access to her inner life, as she begins to understand and live with a recent medical diagnosis. As she describes the vast changes in her different states of mind in a series of poetic snapshots, her artistic aura shines through with lightness, courage, and humor. In expressing the borders between fear, doubt, vulnerability, and love, she reminds us of the delicate balance between human fragility and resilience, and how the role of poetry and music offers a balm when we are faced with psychic turbulence." — Yo-Yo Ma, Cellist


“Bravery and inspiration come in many forms. In the face of dealing with her own challenges, Eugenia Zukerman has written a beautiful personal narrative that inspires bravery in the face of serious life changes.” — Jaap van Zweden, New York Philharmonic Music Director

“Eugenia Zukerman has taken an experience and event that can be traumatic and brought light to it. Her poetic style of communicating the nature of her world in the face of this challenge is endearing. I believe anybody who is themselves or is having any family member experience some decline in memory will feel uplifted and informed by this highly special and unique work.” — Herbert Pardes, M.D., Executive Vice Chairman of the Board of Trustees of New York-Presbyterian Hospital

“My sister, Eugenia (Genie to me), admirably always embraces the moment for whatever it brings. After recently receiving the diagnosis of cognitive decline, she was stunned but then took stock of how she felt and what it all means. A generous result is her beguiling prose poem, Like Falling through a Cloud, in which she faces the mysteries of memory, and self-discovery through change. In this short, yet revealing, sometimes funny, sometimes sad volume, she shares her experience and her candid self-perceptions. This compact volume has helped me as Genie’s big sister (and a physician) understand what is going on far better than my empiric medical knowledge. This gem of a book should provide solace and insight for family and friends struggling to understand the complex issues of cognitive decline. More than that, it is a tale of bravery, strength, and healing.” — Julie R. Ingelfinger, M.D., Professor of Pediatrics, Harvard Medical School, and Senior Consultant in Pediatric Nephrology at Massachusetts General Hospital for Children at Massachusetts General Hospital in Boston

"I have known and loved Eugenia Zukerman my whole adult life. Of course, it was easy to fall for such a ravishing beauty, devastatingly diaphanous Diana that she is, but once hooked, more arrows felled me: a brilliant musician, to be sure, but also a brilliant and panoramically empowered mind and spirit, a captivating and pioneering tele-journalist and media advocate for the arts, an inspired and masterful writer, endlessly quick-witted and always an impassioned and aware citizen of the world. It should come as no surprise, then, that when she discerned early signs of a potential and ever-unnamed usurper of mental acuity, her response would be to make us all traverse this frightening stage of her life by imbuing tragedy with transcendence in her memoir, Like Falling Through A Cloud. Eugenia’s choice of telling this chilling tale of tenuous tendrils of cognition as aphorisms as light, fleeting and fleeing as dandelion seeds is a true masterstroke. She paints the pages in serendipitous typographical free-verse, with the ease and urbanity of an Ogden Nash, with the nostalgia and romance of Nabokov, and ever with an endearing charm and more than occasional epiphany all her own. Never has a book made me want to laugh and cry in equal and empathetic measure." — Christopher O'Riley, pianist and host of NPR's FROM THE TOP

"Eugenia Zukerman’s new book, Like Falling Through a Cloud, is a masterpiece of inspiration, poetry, reflection, memories, and the heartbreak of discovering that one is having the early signs of dementia. Writing in the present tense, of past reflection, of moments of sheer delight—as well as moments of sheer horror—Eugenia has authored a must-read. I was going to say a must-read for those who suffer from moments of forgetfulness, but instead, I’m going to say it’s a book for everyone. It transcends the particulars, becoming applicable to any situation you might find yourself in. That is the sign of a truly inspiring volume, a classic, and Like Falling Through a Cloud is a classic—for everyone.  The beautiful message that Ms. Zukerman has created in the astonishing, revealing, and inspiring book is that we all have life to live, dreams to dream, and human kindness to both give and receive. The author has always been an extraordinary talent, both musically and linguistically. In Like Falling Through a Cloud, she has written the unforgettable." — Judy Collins, American Singer and Songwriter

"Eugenia Zukerman bravely shares her personal journey and self-awareness as she battles with Alzheimer’s and the anxiety that comes with it. She inspires with her strength and willingness to find joy and beauty in small and big things in life. Through music, love, family and peace of nature, you feel her determination to appreciate every day and the will to move forward. She beautifully translates her frightening and inspiring experiences into poetry for the reader." — Yefin Bronfman, pianist

"The most interesting writers of our time are creating hybrid literature that combines poetry, fiction, and autobiography. As we proceed in life, our way of perceiving the world changes, and few writers have the courage to depict this. Eugenia Zukerman—perhaps because she is a musician and a writer—has chronicled the music of the brain in an extraordinary way. Like Falling Through a Cloud is beautiful and riveting." — Erica Jong, author of FEAR OF FLYING

"In her moving debut memoir, Zukerman, a flutist and former arts correspondent for CBS Sunday Morning, tells of her diagnosis of Alzheimer’s disease. Writing in a mix of verse and prose, she begins with a poem as she realizes her memory is becoming increasing faulty (“Sometimes/when I wake up/it’s dark/where am I?”), then tells of meeting with her neurologist, who also diagnoses her with anxiety. Subsequent chapters examine therapist visits, ruminations about drug and clinical trials, and her mother’s death at 103. Zukerman, now in her 70s, writes of how her memory loss has affected her life with her husband, and their eventual move to upstate New York, where the disease progresses (“So this is how it begins/ The caretaking,/ the endless helping my once independent wife,” she believes her husband must be thinking). “I’ve got a shiner where my brain used to be—it’s become more and more troubling to me,” she says plaintively, easily eliciting empathy from readers. While the unorthodox narrative structure can distract at times, it doesn’t detract from the work’s power. Zukerman’s unflinching memoir in verse will most appeal to those dealing with this common yet complex illness."—Publishers Weekly

"A published novelist, a television commentator and, most impressively, one of the finest flutists of our time," Eugenia Zukerman worked hard and juggled it all-performing, writing, interviewing artists, directing concert series-with ease and grace. Until a few years ago, in her early 70s, she became forgetful, misplacing papers, losing her words. Concerned, her daughters insisted she get tested. Eugenia, whose mother was sharp at 103, wasn't worried. Until her sister, a doctor herself, reminded her: six of their mother's siblings suffered cognitive decline and died in their 70s. The results of Eugenia's neuro-psych exam and MRI confirmed: her cognitive impairment was real, and would only get worse. She had Alzheimer's. Outraged and terrified, Zukerman vowed to do her best to handle her diagnosis "privately and purposefully." She began to chronicle her unraveling, mostly in verse. The result is the gorgeous new book, Like Falling Through a Cloud: A Lyrical Memoir of Coping with Forgetfulness, Confusion, and a Dreaded Diagnosis [East End Press; November 2019], an intimate, courageous, heartbreaking, lyrical, and uplifting memoir of Eugenia's year of finding her way through the maze of confusion and brambles of loss." —Broadway World

"Like Falling Through A Cloud by Eugenia Zukerman available at Amazon Barnes & Noble and Goodreads. What if the dreaded world of Alzheimer’s was also a world of emotional discovery? Eugenia Zukerman’s poetry and simple prose, both heartbreaking and ultimately inspirational, ushers the reader into her world as she unflinchingly examines familial loyalties, moments from her past and present, and the need to face an uncertain future due to the diagnosis of a condition that she truly hopes “will remain unnamed.” Flutist, writer, artistic director of major music series, television journalist, educator, and internet entrepreneur, Zukerman addresses her “lapses and losses” as she confronts and deals with a future under the shadow of her Alzheimer’s diagnosis." —Not Born Yesterday​

"Like Falling Through a Cloud unfolds in fragments and rhymes, nightmares and revelations. Eugenia opens up about her childhood and therapy sessions; her fear of exposure, vulnerability, and public failure; her initial resistance, and creative coping strategies. Gradually, Eugenia comes to accept the reality of living her life with a debilitating condition. In the process, she discovers her own remarkable bravery and resilience. Her powerful story of going from terror and turbulence to gratitude for another day offers comfort to the millions of people grappling with dementia and Alzheimer's disease." —Broadway World

Hailed by the press as “one of the finest flutists of our time,” Eugenia Zukerman is an internationally renowned recitalist and soloist who enjoys her busy schedule as a performer, writer, artistic director, and educator. She was the Artistic Director of the Bravo! Vail Valley Music Festival in Vail, Colorado for 13 years and the Arts Correspondent on CBS Sunday Morning for more than 25 years. Her list of writing credits includes four books and multiple screenplays, articles, and book reviews. A Massachusetts native, Zukerman makes her home in upstate New York with her husband, two horses, three dogs, and assorted wildlife.