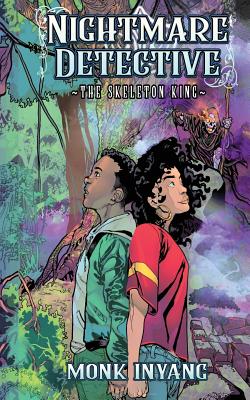 "Nightmare Detective is a delightful adventure about friendship, childhood, fears, growing up, and helping others."
- Manhattan Book Review

Uko Hill is a twelve year old black boy in Newark suffering from the same nightmare every night - an army of terrifying skeletons breaking into his home and destroying everything. He's given up hope of ever having normal sleep until one night, in the middle of his nightmare, he meets Toni. She's part of a group called the Nightmare Detectives - a trained squad of middle schoolers that can jump into the nightmares of other kids and help stop them for good.

Toni gives Uko the chance to become a Detective and he reluctantly accepts but before he can join, he must prove himself by passing a series of tests. Along the way he learns that there's a lot more to living in this dream world than he expected. Can he stand up to the evil that he discovers? Can he overcome his own fear and doubt to join the legendary Detectives?

"The Skeleton King" is the first book in the "Nightmare Detective" trilogy, a series that celebrates diversity and boundless imagination. Perfect for readers aged 9 - 14.