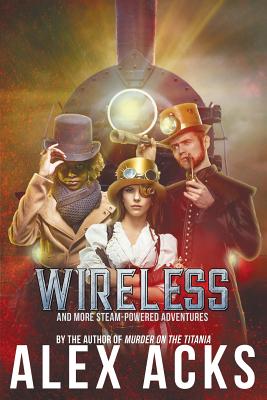 Captain Marta Ramos, the most dangerous pirate in the Duchy of Denver, is back and she and Simms are up to their goggles in trouble. Has General del Toro found a way to use the Infected as an army and can Captain Ramos work with her arch enemy, Colonel Geoffrey Douglas, to stop him? Can Simms join forces with the devious Deliah Nimowitz on a jailbreak, some sewer misadventures AND a high society soiree involving tea, a heist and sausages? And what about the Rail King and his nefarious plans? Can Captain Ramos and her crew stop him before he completes his latest dastardly deed, one that may result in Deliah's demise? Check out the next installment of the exciting adventures of Captain Ramos and her valiant crew to find out more

Wireless picks up where Murder on the Titania and Other Steam-Powered Adventures with 3 linked novellas, all set in or near the Duchy of Denver, in an American West that never was.

"Blood in Elk Creek" - When Captain Marta Ramos's aeroplane is shot down over hostile territory, she has to work with her nemesis, Colonel Geoffrey Douglas, head of the Duke of Denver's security division, to try and stop General del Toro's plot to spread the dreaded Infection throughout the Plains tribes, thereby creating a monstrous private army. And the clock is ticking when Marta contracts the Infection too.

"Do Shut Up, Mister Simms" - While Marta is off having adventures, Simms involuntarily signs up for one of his own. He and the crew have to join forces with the lovely Deliah to break a crewmember out of the Duke's prison. Then it's off to visit two of Simm's least favorite things: the city sewers and a high society tea party, whilst serving as Deliah's escort. Make that three of his least favorite things.

"Wireless" - Marta returns from the Plains a changed woman and Simm's plan to cure her gets Deliah kidnapped. Now the crew is racing against time to rescue her and stop the Rail King from executing his latest dastardly plan, with some help from some new and unexpected allies.