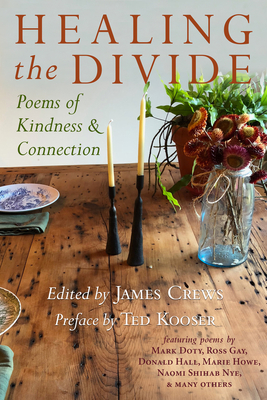 Poems of Kindness and Connection

This anthology features poems by Mark Doty, Ross Gay, Donald Hall, Marie Howe, Naomi Shihab Nye and many others. These poets, from all walks of life, and from all over America, prove to us the possibility of creating in our lives what Dr. Martin Luther King called the "beloved community," a place where we see each other as the neighbors we already are. Healing the Divide urges us, at this fraught political time, to move past the negativity that often fills the airwaves, and to embrace the ordinary moments of kindness and connection that fill our days.

James Crews’ work has appeared in Ploughshares, Raleigh Review, Crab Orchard Review and The New Republic, among other journals, and he is a regular contributor to The (London) Times Literary Supplement. His first collection of poetry, The Book of What Stays, won the 2010 Prairie Schooner Book Prize and received a Foreword Magazine Book of the Year Award. Other awards include residencies from the Sitka Center for the Arts and Caldera Arts as well as two Dorothy Sargent Rosenberg Prizes. He holds an MFA in creative writing / poetry from the University of Wisconsin-Madison and a PhD in writing and literature from the University of Nebraska-Lincoln, where he worked for Ted Kooser’s American Life in Poetry newspaper column and grew to love the Great Plains. He now lives on an organic farm in Shaftsbury, Vermont, just a few miles from the Robert Frost Stone House.

Ted Kooser, 13th United States Poet Laureate (2004-2006), is a retired life insurance executive who lives on an acreage near the village of Garland, Nebraska, with his wife, Kathleen Rutledge. His collection Delights & Shadows was awarded the Pulitzer Prize in Poetry in 2005. His poems have appeared in The Atlantic Monthly, Hudson Review, Antioch Review, Kenyon Review and dozens of other literary journals. His memoir, Local Wonders: Seasons in the Bohemian Alps, a Barnes & Noble Discover finalist in nonfiction, also won the 2002 Friends of American Writers Award and ForeWord Magazine’s Gold Medal recognition for autobiographical writing. His newest collection, Kindest Regards: New and Selected Poems, was published by Copper Canyon Press in 2018