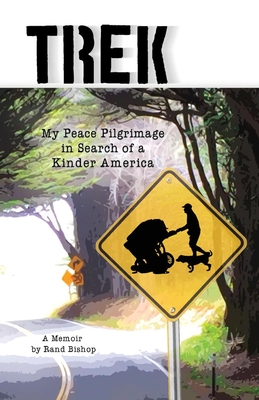 My Peace Pilgrimage in Search of a Kinder America

Early 2017. Rand Bishop's heart was breaking. With post-election America turning mean, the Grammy-nominated songwriter/author couldn't sit idly by. So, inspired by the woman called Peace Pilgrim, Rand — at 67, with chronic knee and foot issues, minimal camping experience, and zero knowledge about long-distance hiking — decided to TREK from Southern California to the Central Oregon Coast, a distance of 900 miles. Understandably, concerned friends and family members attempted to dissuade Rand from a venture fraught with such potential peril. Still, he remained undeterred, convinced that traveling by foot offered his best opportunity to meet folks one-on-one, listen to their concerns, engage in civil, constructive dialogue, and locate patches of common ground. Amid the dissonance of tribal rancor and blame, Rand needed to know there were still nice people out there. So, he went searching for a kinder America. With TREK, the author invites the reader along, as he pushes a jury-rigged cart christened "the Pilgrimmobile" over urban sidewalks into the hinterlands, along dedicated bike paths, aside interstate highways, through neighborhoods and massive industrial parks, on narrow, decaying blacktop and remote, rutted, mountain trails. The pilgrim treks past windswept corporate farms, then inhales fresh, salty breezes, dwarfed by the awesome, dramatic beauty of the Pacific coastline. Facing constant alienation from the common presumption that a grey-bearded, cart-pushing pilgrim must be homeless, he confronts seemingly insurmountable grades, spans precarious bridges, encounters wild animals, endures relentless wind, moisture, hunger, blisters, exhaustion, and loneliness. The pilgrim gets spat upon, spattered with gravel, nearly knocked down a cliff by a Goliath RV. One fateful afternoon, the earth literally swallows him whole, buries him in dirt and rocks, and straps him down with thorny blackberry vines. But, readers can take heart, because these difficulties are far outnumbered by spontaneous demonstrations of kindness and generosity from myriad Good Samaritans. Meanwhile, the pilgrim hangs with the homeless, convenes with fellow seasoned adventurers, lends an empathetic ear to the forlorn, the dispossessed, and the self-possessed, performs impromptu campground concerts, and withstands evangelical attempts to save his immortal soul. By TREK's end, after meeting a thousand fellow humans over the course of one life-changing spring and summer, Rand Bishop returns home nourished with the knowledge that, one-on-one, the vast majority of us are not only nice, but kind, caring, and often generous. And, despite our obvious differences, we have far more in common as individuals than we might have assumed.

Oregon native Rand Bishop grew up in the suburbs of Portland fixated on two equally impractical career paths: stage actor or rock star. Between attending Oberlin College and the University of Washington, a season of bit parts at The Oregon Shakespeare Festival made his choice obvious. Rand ran away with the Rock 'n' Roll Circus. During the 1970s and '80s, Rand recorded for Elektra, A&M, Sony, and MCA and shared stages with The Doors, Alice Cooper, Jethro Tull, Rod Stewart, and Credence Clearwater, while honing his tune-smithing craft. Tiring of the road, he transitioned to "the other side of the desk," to earn his stripes as a platinum record producer, talent-development executive, and music publisher. An in-demand studio singer, Rand harmonized with the Beach Boys, Rita Coolidge, Kris Kristofferson, Mick Fleetwood's Zoo, Graham Nash, Tim Curry, and Quiet Riot. As a Grammy-nominated, BMI Award-winning, Million-play songwriter, Rand counts 300-plus diverse credits: from Cheap Trick to Tim McGraw, Heart to Indigo Girls. He has contributed compositions to more than a dozen feature-film and TV soundtracks and several stage musicals. Rand's song catalogue has generated over 20 million sales and continues to rack up millions of broadcast performances year after year. Positive public response to "My List" (Tim James/Rand Bishop) — a five-week #1 for Toby Keith, and the most-played country single of 2002 — inspired Rand to co-author My List: 24 Reflections on Life's Priorities (McGraw-Hill, 2003). After that publication, he authored two career guides for aspiring songwriters (Makin' Stuff Up and The Absolute Essentials of Songwriting Success) both issued by Alfred Music Publishing. Rand's self-published novel/mock memoir Grand Pop spent a year in development as a premium-cable series under producer Ken Topolsky (The Wonder Years, Party of Five). Rand's latest book is the self-published memoir, TREK: My Peace Pilgrimage in Search of a Kinder America. Rand is a produced playwright, an award-winning/optioned screenwriter and, for six years, contributed a regular column to American Songwriter Magazine. He has guest lectured at colleges, sat on music industry panels, facilitated creative workshops, and remains a highly respected songwriting coach. Rand has served on the boards of directors for three non-profits: Songwriters and Artists for the Earth (SAFE), the Nashville Film Festival, and Peace Village, Inc. In 2012, after four decades in Los Angeles and Nashville, Rand returned to his home state to be of assistance to his aging parents. Residing in Newport, on the Central Oregon Coast, he is developing and staging a one-man musical multi-media performance piece entitled TREK on Stage, comprised of stories and songs inspired by his 2017 900-mile pilgrimage. Most days, Rand can be seen on Nye Beach taking his beagle Millie for yet another long walk.
Loading...
or support indie stores by buying on