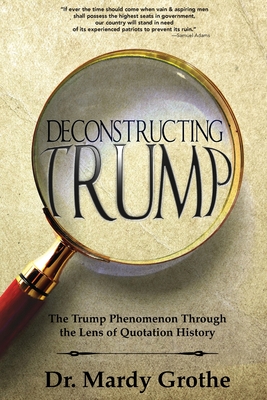 The Trump Phenomenon Through the Lens of Quotation History

If history's greatest thinkers, writers, and political leaders were around today, what would they say about Donald Trump? Happily for us, they've said amazing things on this very subject, often in prescient and compelling ways. In the fourth century B.C., for example, Plato described Trump perfectly in his Laws:

Is it a mere coincidence that someone writing 2,500 years ago was able to capture the essence of the current U. S. President? Hardly. In Henry V (1599), Shakespeare did it as well:

"I did never know so full a voice issue from so empty a heart."

And, in his 1798 Farewell Address, George Washington followed suit by saying:

"Guard against the impostures of pretended patriotism."

In 2015, not long after Trump declared John McCain a "loser" for becoming a Vietnam War POW, quotation maven Mardy Grothe accidentally stumbled upon a 350-year-old Moli re quotation that got him thinking, "Wow That sounds a lot like Donald Trump." Over the next several months, after finding similar Trump-illuminating quotations from past thinkers, Grothe launched a quotation-seeking, self-help effort in order to help him cope more effectively with the disturbing reality of a Trump Presidency.

That self-help project ultimately evolved into this remarkable anthology of 1,000 quotations, all of which were written decades--or, more typically, centuries--before Trump arrived on the political scene. This book attempts to deconstruct The Trump Phenomenon. It has been prepared exclusively for those who've been alarmed, troubled, upset, embarrassed, bewildered, disgusted, or otherwise distressed by the whole idea of Donald J. Trump as President of the United States of America.