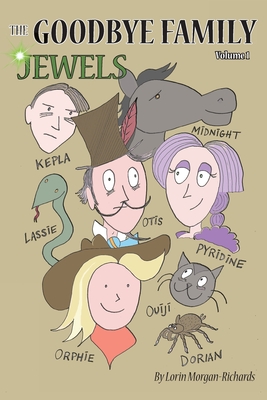 Ghoulish, macabre, ghastly, and downright cuts to the funny bone, The Goodbye Family Jewels: Volume 1, digs into selected works of Lorin Morgan-Richards' first ten books of his Weird West comic strip. Since its debut in 2017, the Goodbye Family has made you weep with laughter, becoming the world's most morbidly hilarious comic strip. In this special edition, rare mementos, and an introduction to the series by its creator, this inaugural volume will charm both longtime fans and new readers.

The Goodbye Family are undertakers living in the Old Weird West of author and illustrator Lorin Morgan-Richards. The Goodbye Family is Pyridine, matriarch and mortician, Otis, father and hearse driver, daughter Orphie, who is both gravedigger and Sheriff, son Kepla, a recluse and aged hermit, pets: Ouiji the cat, Dorian the Needlepoint Tarantula, Lassie the lasso snake, and Midnight their horse.