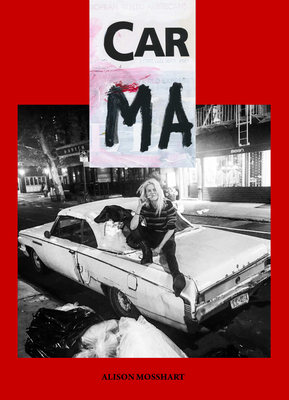 CAR MA is artist and musician Alison Mosshart's first printed collection of paintings, photographs, short stories, and poetry. It is a book about cars, rock n' roll, and love. It's a book about America, performance, and life on the road. It's a book about fender bender portraiture, story tellin' tire tracks, and the never- ending search for the spirit under the hood. ​Mosshart imagines the auto body shop like some other Coney Island. And America's highways- the last great roller coasters. Shows us that the engine on fire is connected to the guitar feeding back since birth. And the sensation of walking on stage and facing an audience is like the laugh before the scream in a car without brakes. She ruminates that automobiles- with their doors and mirrors and windows, engines and wheels and radios- portray us. Mirror our need to be in or to exit, our inward reflections and outward visions, our lifetimes of tinkering with the mysterious heart. That which runs until it doesn't. Throughout history the car has been a symbol of freedom and hopeful adventure. It stands to reason it is also a symbol of our subsequent spinning out... over things we never thought could happen during a song that fucking good with the volume up that fucking loud. If you've ever found yourself feeling holy, pulling out of the gas station with a full tank, like the last beautiful free soul on this planet- This book is for you. In fact it's probably about you.

Alison Mosshart is a 41 year old artist, musician and writer currently residing in Nashville and Los Angeles. She is best known for her work in her musical duo The Kills, as well as fronting the Grammy nominated Nashville based rock n' roll band, The Dead Weather. She has released upwards of 16 albums in her musical career and has toured around the world performing for the last 27 years. Mosshart is also a visual artist, working in paints, multi-media and photography. She studied art for two years at the University of Florida, following a brief unrecorded spell at the University of Honolulu learning print making in the middle of the night. She is for the most part, self taught. She has had 5 major solo exhibitions, Fire Power" at the Joseph Gross Gallery in NYC, 2015, "Fire Power Los Angeles" at Maxfield in Los Angeles,2017, Tonight Only, in Muscle Shoals, Alabama, 2016, Side Effects" at Panteon in Mexico City, 2018, and Los Trachas at FF-1051 Gallery in Los Angeles, 2018. She has had artwork in numerous group shows and art fairs around the world, and contributes to many fine art charity auctions, most recent for the Silverlake Conservatory of Music and Teenage Cancer Trust. She is currently working on another Kills record and another book.
Loading...
or support indie stores by buying on