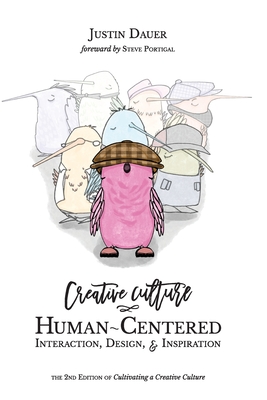 The first edition of Justin Dauer's 2017 book Cultivating a Creative Culture was written around a core concept: empathy, humility, and creativity at the office--permeating how we treat one another, support one another, and the collective influence upon how we create.⁣

It's upon that last notion, "how we create," where this second edition further focuses on the parallels between "making" and "interacting." Process and practice. Design and culture.

We cannot preach outwardly about empathy for those we're designing for if as designers, researchers, architects, developers (and on and on) we're not supporting each other. The notion of being human-centered has an innate synergy between design process (and ultimate product) and office culture (and empathetic interactions). To the benefit of both dynamics, those touch points are identifiable and exploitable.

Creating with compassion in an environment fueled by compassion means we never lose sight of what it's all about: people. Beyond functioning in this manner because "it's the right thing to do," quality of design work, loyalty internally (team) and externally (users), and product innovation are all benefits to reap.Join Justin as he demonstrates how putting humans first - in our design process and in the workplace - yields a successful end product and an endlessfountain of inspiration.

With a new foreword by Steve Portigal, author of "Doorbells, Danger, and Dead Batteries: User Research War Stories," and "Interviewing Users: How to Uncover Compelling Insights."