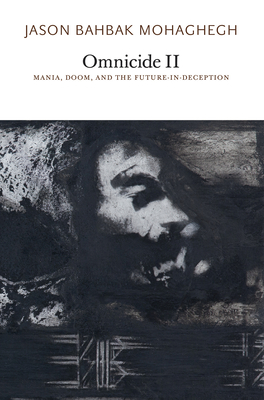 Mania, Doom, and the Future-in-Deception

An infernal catalogue of manic visionaries, inspired by the poetry of the Middle East.

In a new work in which conceptual elaboration, storytelling, and poetics are fused in the infernal heat of the desert, the cycle of Omnicide is closed with a philosophy of doom, deception, and the game, plunging headlong into the inevitable, the fatal, and the infinite.

A series of controlled combustions fuelled by fragments drawn from the poetry and literature of the Middle-East, Omnicide II introduces us to a new cast of manic visionaries, from the Selemaniac to the Crystallomaniac, the Bibliomaniac to the Aeromaniac. In his relentless cataloguing of the myriad figures and portents of omnicidal doom, Jason Bahbak Mohaghegh resumes the offensive of those writers, artists, and thinkers for whom the fiercest creative incandescence is only kindled in the shadow of certain doom.

Amid war cries and lullabies, mages, wolves and pelicans, sabres and crystals, drones and soul-stealers, in settings ranging from the opium den to the Qatari luxury hotels, with his unique style and methodology, his dizzying breadth of references, and his implacable will to follow the most deranging lines of thought and evoke the most startling images, Mohaghegh draws the reader into territories disturbing and unfamiliar, atmospheres delicate and grotesque, moods morbid yet life-affirming, in a book that evokes fever and exudes dead calm.

The utterly absorbing music of this writing both lulls and disquiets—a contemporary Necronomicon, an inexhaustible treasury of recipes for disaster, catastrophe, ruination and destruction, all in the name of the most intense creation.

Jason Bahbak Mohaghegh is Associate Professor of Comparative Literature at Babson College. His focus is on tracking experimental thought in the so-called Middle East and the West, with particular attention to exploring concepts of chaos, violence, illusion, silence, sectarianism, madness, disappearance, and apocalyptic writing. He is the author of The Chaotic Imagination (2010); Inflictions (2012); The Radical Unspoken (2013); Insurgent, Poet, Mystic, Sectarian (2015); Omnicide: Mania, Fatality, and the Future-In-Delirium (Urbanomic/Sequence Press, 2019); and Night: A Philosophy of the After-Dark (2020).