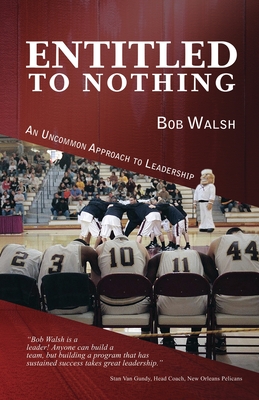 Entitled to Nothing is an inside look at a championship culture built with an uncommon approach to leadership. Bob Walsh joined forces with a team of tough, hungry young men to create a level of ownership that led to sustained, elite success. Together they discovered an experience inside a demanding culture that did more than just win basketball games. It had a transformational impact on their lives.

In September of 2005, Rhode Island College, a division III state school in Providence, RI, hired their third men's basketball coach in as many years. Bob Walsh, a respected Providence College assistant, took over a program at a commuter school with no real identity or history of basketball success. Nine years later Walsh had built a national power, known for their toughness and competitive edge. The Anchormen won 204 games over those nine seasons, including 11 conference regular season and tournament titles. Without an NCAA appearance in nearly 30 years, RIC became one of just five teams in America to play in eight straight NCAA Tournaments, including three trips to the Sweet Sixteen and one magical run to the Elite Eight.

Entitled to Nothing provides unfettered access to Walsh's transparent style and the leadership lessons applied throughout a championship journey. Along the way, he asked questions that challenged standard group think and the traditional leadership model, leading to new thought processes and behaviors. Walsh offers an inside look at a game plan for sustained success, one that translates to elite performance in any organization focused on team building. Entitled to Nothing will encourage you to discover and refine your own unique leadership approach.