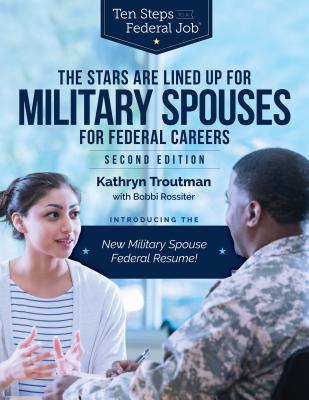 Stars Are Lined Up for Military Spouses (Paperback)

To keep applicants and fed career advisors up to date, Federal Jobs Guru Kathy Troutman is releasing her cutting-edge 2nd edition of the only guidebook for these job seekers. It shows how military spouses still have an advantage over the general public on USAJobs using the improved Military Spouse Hiring Authority (E.O. 13473).

"On USAJobs, the government website for federal positions, there are many jobs marked for military spouses. Military spouse can apply to "competitive / federal employee" announcements via this Executive Order," reports Troutman. "In fact the number of military spouse positions is on the rise, increasing by 70 percent on USAJobs since the 1st edition."

The author says many military spouses are unaware that they can apply on the website with the status of federal employee, and instead they go for jobs open to US citizens. Since veterans' preference is used in the general openings, the military spouse doesn't stand a chance. But in fed jobs designated as being for military spouses on USAJobs, vet's preference isn't used. So the odds increase dramatically.

Best-selling author Kathryn Troutman is known to be an innovator in the design of the 3-5 page federal resume. In 2010, she created the popular Outline Federal Resume Format, which uses KEYWORDS IN ALL CAPS to help the required skills and abilities catch the eye of fed HR. For the 2nd edition of her guide, she adapted the outline format and created the new Military Spouse Federal Resume. Her goals were to make these applicants stand out and look better than other fed jobseekers.

"It's time for military spouses to take credit for what they've done," Troutman asserts. "I decided that they should start putting their Permanent Change of Order (PCS) history near the top of their resumes. The orders show where they've lived and moved over the years as a military spouse. This says up front that they're a military spouse, and it explains why they have changed jobs and locations so frequently."

In regular resumes, Troutman says, the job histories of military spouses tend to look like a long laundry list of part-time and volunteer positions. There are often lots of gaps between jobs. Her guide features six excellent federal resume samples from actual spouses that show how the skills mandated by fed HR can be pulled from the typical part-time and volunteer work. The six military spouses volunteered to have their case histories and sample resumes included. Three have already been hired for fed jobs on bases.

In the past, it's been tough for military spouses to establish their own careers. The federal government has stepped in to help. Just since 2017, the number of jobs specifically targeting Military Spouses has increased 70% on USAJOBS. This book, the only federal job guide for military spouses, is now updated with the latest winning strategies

SPECIAL FEATURES OF THE 2ND EDITION INCLUDE:
o Introduction of the NEW Military Spouse Federal Resume, which features three ways to stand out as a military spouse applicant
o 6 excellent sample "after and before" resumesfrom real-life military spouses, showing how to find skills from volunteer efforts and your role in military life to match the announcement's requirements
o A chart of keywords to include in resumes for the most popular job series for military spouses
o An original list of the number of DOD federal civilian jobs at each base, which shows the bases with the most opportunities
o A user-friendly, clear 7-step process is provided.
o Fun and attractive two-color layout makes the info accessible.

SAMPLE RESUMES from 6 Real Military Spouses Include:
ANN J. Hadn't worked in 22 years but landed job as Protocol Officer with skills from volunteer positions and her military life.

NICOLE B. Has many skills to offer as entrepreneur with own custom cookie business.

JAN M. Added Accomplishments to her resume and got a GS-14 fed position in DC.

A military family can use this additional income. So pick up a copy of this helpful guide today

Kathryn Troutman is the leading expert in federal resume writing. President of The Resume Place(r) and creator of the Certified Federal Job Search Training Program, Troutman created a popular curriculum for the US Military - Ten Steps to a Federal Job. Founder of www.resume-place.com. Kathryn wrote the FIRST-EVER book on federal resume writing in 1996 - Federal Resume Guidebook, 6th Ed. This book is now the NO. 2 resume book in America! Kathryn lives in Baltimore, MD
or support indie stores by buying on
Copyright © 2020 American Booksellers Association